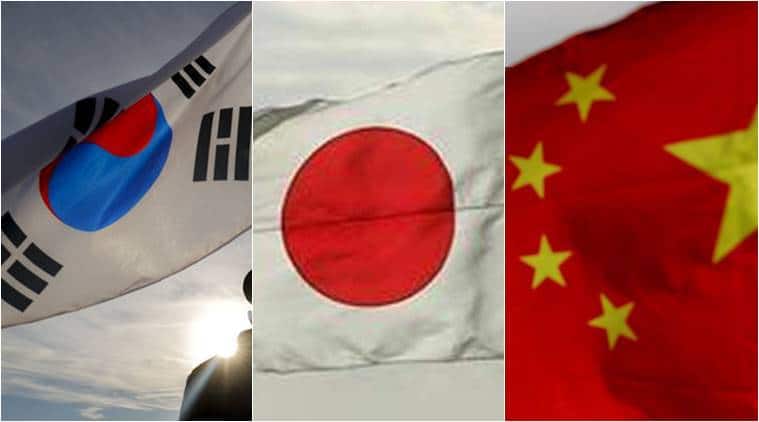 Top diplomats of South Korea and Japan plan to meet their Chinese counterpart in Beijing next week amid a flare-up in tension over trade and history, Seoul’s foreign ministry said on Friday.

Foreign ministers Kang Kyung-wha of South Korea, Taro Kono of Japan and Wang Yi of China will meet from Tuesday to Thursday, the ministry said. The last such gathering was three years ago.

Kang and Kono are also expected to meet separately on the sidelines of the event, for the first time since South Korean President Moon Jae-in on Thursday urged dialogue to mend ties. The ministry said the two-way talks had not yet been finalised.

Ties between the neighbours are arguably at their lowest ebb since their relationship was normalised in 1965, hit by a heated feud over the issue South Korean forced labour during World War Two which spilled over into a bitter tit-for-tat trade row.

In a speech marking Korea’s independence from Japan’s 1910-45 rule, Moon toned down his recent stringent rhetoric regarding Japan, saying Seoul would “gladly join hands” if Tokyo chose dialogue and cooperation. At the meeting, the ministers are also expected to prepare for a summit planned later this year.

From 2008, the three countries had agreed to hold a summit every year to foster regional cooperation. But bilateral tension, including that between China and Japan, has often intervened. “We expect the meeting will help reinforce the institutionalisation and substantiate the foundation of the three-way cooperative scheme,” the ministry said in a statement.

Relations between South Korea and Japan worsened sharply after the South’s Supreme Court last year ordered Japanese companies to compensate some wartime forced labourers. Tokyo says the matter was settled by the 1965 treaty normalising ties. The talks come at a sensitive time ahead of the August 28 date when Japan’s decision to end South Korea’s fast-track trade status takes effect, a move that prompted South Korea to follow suit.

As a countermeasure, Seoul has also warned it could consider scrapping an intelligence-sharing pact usually automatically renewed on Aug. 24 every year. The accord, the General Security of Military Information Agreement (GSOMIA), eases three-way intelligence gathering with Washington which is pivotal in dealing with North Korea’s nuclear and missile threats.

In a separate statement, the South Korean foreign ministry expressed concern over Kono’s reported remarks that Moon should “exert his leadership” to resolve the dispute, saying they were unhelpful for stable management of two-way ties.