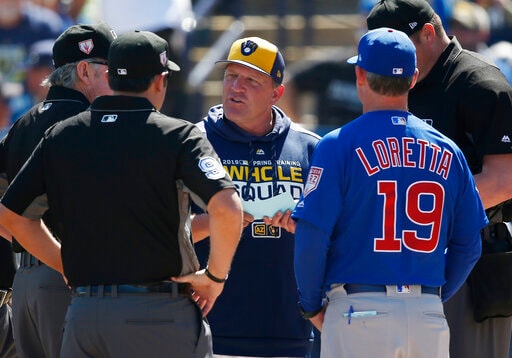 MILWAUKEE Brewers manager Craig Counsell says bench coach Pat Murphy has been released from the hospital after suffering a heart attack during a team workout Saturday.

It was a scary day, Counsell said on Monday before the Brewers game with the Chicago White Sox.

Counsell said Murphy sat down while the team was practicing infield defense and wasn’t feeling well. Trainer Rafael Freitas was nearby and escorted Murphy to the clubhouse, where he met with team physician, Dr. Mark Niefeldt.

Niedfeldt was in the building fortunately and diagnosed what was going on, and we got him to the hospital,” Counsell said.

Milwaukee doesn’t plan to bring in an additional staff member while Murphy recovers.

Murphys heart attack was the scariest part of an eventful weekend for the Brewers that included outfielder Lorenzo Cain opting out of the rest of the season, first baseman/outfielder Ryan Braun going on the injured list with an infected index finger and a home-opening series with St. Louis getting postponed because multiple Cardinals players tested positive for the coronavirus.

I guess the way Id look at it is when I was driving home from the hospital on Saturday night after seeing him, you think to yourself, Man, this is a great day because my friend just had a heart attack and I just got to go see him and hes out of the procedure, hes doing pretty good and the doctors are giving him a good diagnosis, said Counsell, who played for Murphy at Notre Dame from 1989-92. Thats the only way you can think right now. Theres so much going on. Theres no other way to think about this.

Theres certainly been a lot happening, but your friend survived a heart attack and hes home, out of the hospital already, so you just feel thankful.

The 61-year-old Murphy is in his fifth season as the Brewers bench coach. Murphy posted a 42-54 record as the San Diego Padres interim manager in 2015 after Bud Black was fired.