Coronavirus originated from nature not man made chinas ambassador to india 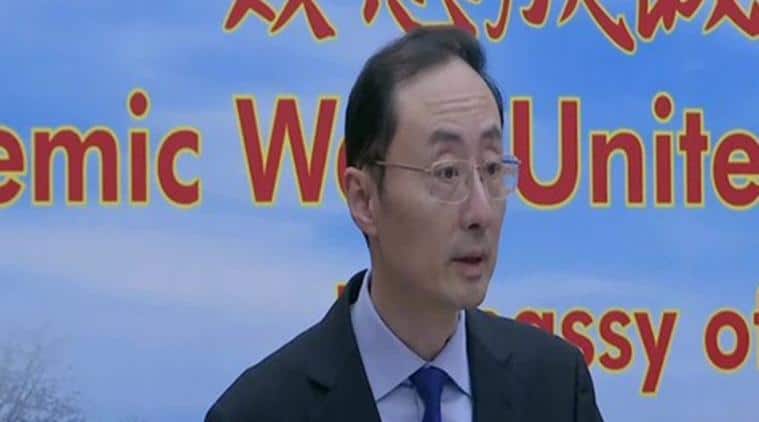 China on Tuesday dismissed rumours surrounding the origins of  coronavirus, saying the infection is natural and not man made. Reiterating that the rumours have the potential to stigmatise people around the world, China’s Ambassador to India Sun Weidong said, “The virus is originated from nature and is not man-made. The virus is terrible but any rumour regarding it is even more terrible.”

Rumours and wild conspiracy theories began to gain currency across the world as the number of positive cases soared in the last one month. Most of them are grounded on suspicions that the Chinese government had some role to play in the virus outbreak.

Earlier this week, Congress leader Manish Tewari raised the possibility that the virus could be a biological weapon developed by the Chinese. Sharing on Twitter a screenshot of a page from an 1980s fiction book,  he underlined a sentence that talks of the decade’s “most important and dangerous” “biological weapon” which the Chinese used to call “Wuhan-400”. The book plot revolves around a Chinese military lab creating a biological weapon.

The idea that the virus is indeed a biological weapon created in a Chinese lab resonated strongly with Republican Senator Tom Cotton, who said he doesn’t have any conclusive proof but questions need to be asked because of “China’s duplicity and dishonesty”.

British tabloid The Daily Mail also ran an article stating that scients had warned in 2017 that a SAR-like virus could escape a lab set up in Wuhan.

India’s poultry industry also lost 13 billion rupees in three weeks after speculation on social media that chickens are a cause of the spread of coronavirus, denting demand for chicken and nearly halving prices.

Weidong today assured that the epidemic is now under control as China has taken the most comprehensive and rigorous prevention and control measures to win the battle against coronavirus at the earliest.

At the same time, he said, the virus is a “borderless and a common threat to everyone in the world”, and joint efforts are required to combat it.

He also said there is a drop of over 50 per cent in the COVID-19 cases outside Hubei province, indicating that the efforts to contain the epidemic are proving effective.

The envoy also appreciated India for extending solidarity and expressing readiness to assist China to deal with the epidemic.

Weidong said there is no case of infection as of today among the remaining Indians in Hubei province, the epicentre of the epidemic, and authorities are taking “good care” of them.

China’s National Health Commission on Tuesday said the death toll due to the outbreak climbed to 1,868 on Monday while the total number of confirmed cases jumped to 72,436.

Coronavirus Could Bankrupt Most Airlines, Need To Act: Aviation Body