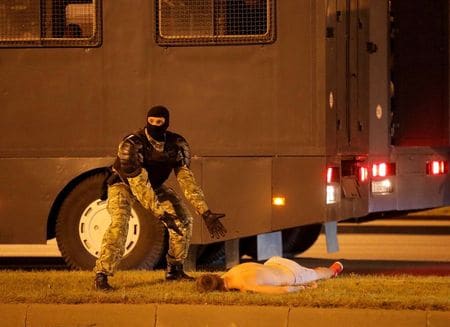 MOSCOW A Belarusian protester who was reported to have died during bloody clashes with police after Sunday’s presidential election told Reuters he had survived a brutal police beating and that he expected to be detained shortly.

The shirtless body of Yevgeny Zaichkin, 35, could be seen in Reuters images of protests in Minsk lying on a grassy patch of ground next to a street with a riot police officer in body armour standing over him and gesturing.

Belarusian opposition media outlet Nexta reported in the early hours of Monday that he had died according to preliminary information and that it was seeking further information.

Reached by phone on Monday, Zaichkin said he had been taken to hospital after the beating and discharged earlier in the day with concussion, four stitches and bruising across his body.

He said at least three or four riot police officers had beaten him over his head and body with truncheons.

The Belarusian Interior Ministry could not immediately be reached for comment.

Belarusian authorities deny anyone was killed during the protests, but say that dozens of officers and protesters were hurt. Police detained around 3,000 people, the ministry said.

The protests broke out after the opposition accused President Alexander Lukashenko of rigging the election to secure a landslide victory.

A representative of the Spring 96 rights group said on Monday that at least one person had been killed during the protests after being knocked over by a police truck.

The identity and fate of that person could not immediately be confirmed by Reuters.

Can Rahul Gandhi Establish A Truce Between Ashok Gehlot And Sachin Pilot?