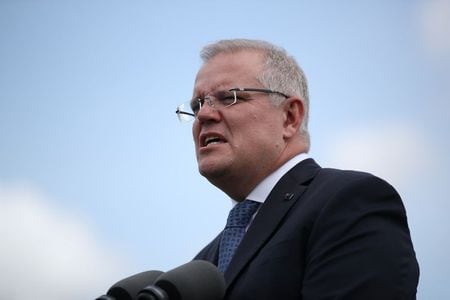 SYDNEY Australian Prime Minister Scott Morrison has extended his lead as the country’s most preferred leader, a poll showed on Monday, boosted by his government’s coronavirus wage subsidy scheme and efforts to contain the spread of the pandemic.

A Newspoll conducted for The Australian newspaper showed Morrison enjoyed the best approval rating over an opposition leader in more than five years.

Morrison’s popularity fell over his handling of bush fires late last year but he has improved his standing with his response to the pandemic, as the country battles a new wave of infections in Victoria state.

Morrison jettisoned his conservative government’s aversion to deficits to pledge spending worth about A$100 billion ($71.50 billion) to employers to keep staff they might otherwise have let go.

The government last week eased rules to qualify for its wage subsidy scheme as a flare-up in infections in Victoria forced large parts of the economy to close.

With just over 21,400 infections and 314 deaths from the virus, Australia has fared better than many other developed nations, helped by strict lockdowns that are expected to push unemployment up towards 10%.

Australia’s central bank downgraded its outlook for the national economy on Friday and warned unemployment would stay high for several years.

Morrison’s approval ratings remained at a high of 68% against a two-point rise among those dissatisfied with his performance, the poll showed.

The poll was based on surveys of just over 1,500 voters across the capital city of Canberra and other regions from Wednesday to Saturday.