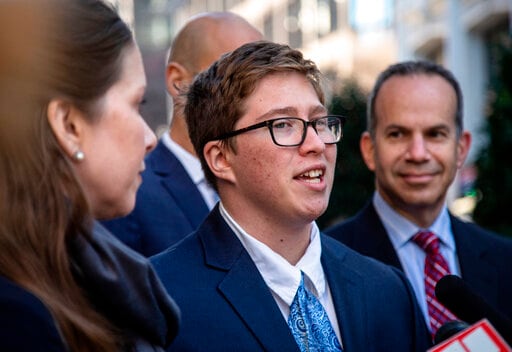 TALLAHASSEE, Fla. A Florida school district was wrong when it forced a transgender high school student to either use the girls bathroom or a single-stall gender neutral bathroom, a federal appeals court ruled.

The ruling issued Friday sides with Drew Adams, who sued the St. Johns County School District because he wasn’t allowed to use the boys restroom. It could have a wide-ranging impact on how schools treat transgender students. Though his assigned gender was female at birth, Adams began the transition to become a male before he enrolled in Allen D. Nease High School in Ponte Vedra Beach.

The school district, however, pointed to forms filled out when Adams was in fourth grade that listed him as a girl, and said he couldn’t use the boys bathroom. The 11th U.S. Circuit Court of Appeals rejected that in a 2-1 decision.

A public school may not punish its students for gender nonconformity. Neither may a public school harm transgender students by establishing arbitrary, separate rules for their restroom use. The evidence at trial confirms that Mr. Adams suffered both these indignities, the court wrote in its opinion.

Adams has since graduated from the high school and attends the University of Central Florida.

The ruling would cover schools in Florida, Georgia and Alabama, and could carry the issue to the U.S. Supreme Court. But the victory is considered a milestone for transgender rights that will resonate beyond high school bathroom use.

I definitely hope that seeing me, an actual trans person, and seeing me just as a normal person, I hope that has a lasting impact,” Adams said. “I really think that ignorance and misunderstanding is really the root of a lot of transphobia in this country.

The ruling noted that Adams had already undergone physical transitions, including a removal of breast tissue and hormones that promoted secondary male characteristics and a deepening of his voice.

The ruling dismissed school board claims that male students’ privacy would be compromised if he used the boys restroom and that some boys might claim to be gender fluid in order to be voyeurs in the girls restroom. The court said there was no evidence that either was the case.

Were Mr. Adams to use the schools restroom for girls, as the School Board maintains he could, his masculine physiology would present many of the same anatomical differences the School Board fears if non-transgender boys used the girls restroom, the ruling said.

Paul Castillo, a lawyer for Lambda Legal, an organization that fights for LGBTQ rights, said the ruling, though immediately affecting a few states, could have a national impact.

I could not be more impressed with his resolve over the years and his steadfast commitment for LGBTQ equality, particularly for transgender youth,” Castillo said. “Even though hes graduated, he continues to put himself, through his case, in a position to help thousands of transgender youth across the country.