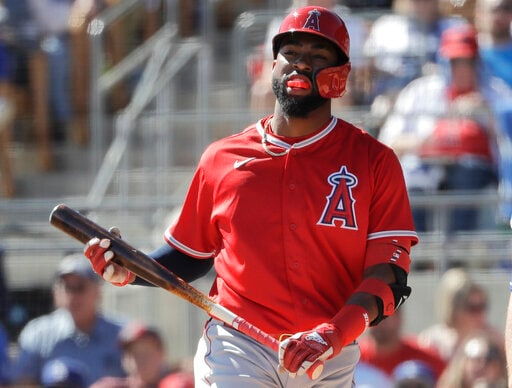 ANAHEIM, Calif. Top prospect Jo Adell is joining the Los Angeles Angels, a person with knowledge of the decision tells The Associated Press.

The person spoke on condition of anonymity Monday because the Angels hadn’t yet announced the transaction.

Adell could make his major league debut in Seattle on Tuesday night when the struggling Angels (3-7) open a six-game road trip.

Adell is a 21-year-old outfielder widely considered to be among the best prospects in baseball. He is ranked No. 6 overall by MLB Pipeline, while other talent evaluators rank him even higher.

The 10th overall pick in the 2017 draft has risen through the Angels’ minor league system more quickly than most projections, reaching Triple-A Salt Lake for 27 games last season as a 20-year-old with five-tool skills and major league power.

Adell appeared to be close to making the Angels’ major league roster out of summer camp, but was sent to their alternate training site in Long Beach. Adell showed off his impressive talent at the plate in camp, but had just enough defensive struggles to persuade the Angels to give him more time to develop.

Three-time AL MVP Mike Trout also is expected to rejoin the Angels in Seattle after missing their past four games for the birth of his first child.

The Angels are in last place in the AL West after a poor start to the shortened season, although their woes are largely due to poor relief pitching.

Maddon and general manager Billy Eppler have said they wouldnt recall Adell until they were ready to give him significant playing time. That means someone in the Angels’ lineup will be seeing less action, but the decision isn’t immediately clear.

Adell has long been projected as Los Angeles’ next right fielder, but veteran Brian Goodwin is batting .333 with two homers and eight RBIs in a strong start to the season.

Left fielder Justin Upton is struggling mightily with a 4-for-37 start to the season and 14 strikeouts, but the Angels likely need to be patient with the high-priced veteran, who is under contract until 2022.

The health of Angels designated hitter Shohei Ohtani also is in question after he complained of discomfort in his right arm following a poor mound start Sunday against Houston.

The Angels are optioning outfielder Michael Hermosillo and infielder Jared Walsh to their alternate training site to make room on the 40-man roster for Adell and Trout.