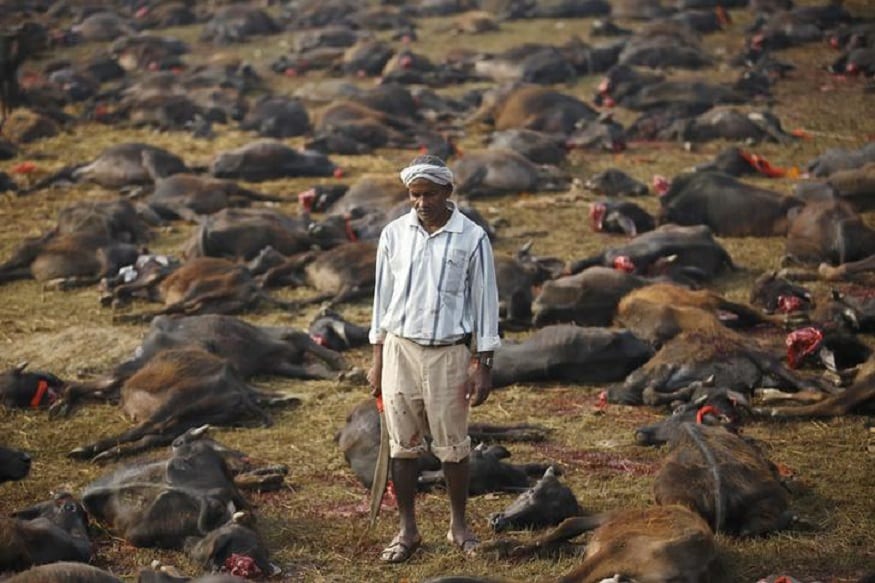 Kathmandu: The Federation of Animal Welfare Nepal (FAWN) will sue the Nepal government and Maha Gadhimai Municipality Mayor in the country's Supreme Court for not stopping the mass sacrifice of animals in the five-yearly Gadhimai Festival despite their commitment to discourage such acts.

At least 4,000 buffaloes, 50 per cent of which were brought from neighbouring India, were sacrificed at the Gadhimai temple in south Nepal's Bara district this year as part of the Gadhimai Festival, believed to be the world's biggest animal sacrifice at one place.

Tens of thousands of people had poured in from different parts of Nepal and India to take part in the month-long festival, which had December 3 and 4 as the main sacrifice days.

Around 70 per cent of the pilgrims at the festival come from neighbouring India as authorities in the country do not allow such acts of animal sacrifice there.

In August 2016, the Nepal Supreme Court, in response to a petition filed against the slaughter, had issued an order to the government to stop animal sacrifices at Gadhimai fair.

However, this year the temple authorities only banned the sacrifice of pigeons in a symbolic show of respect to the apex court's verdict.

Chairperson of FAWN Sneha Shrestha said the central and local governments did nothing to discourage or stop animal sacrifice, which is "based on blind faith at the temple", despite the Supreme Court's verdict.

Other than the Nepal government and Maha Gadhimai Municipality Mayor, Shrestha said Gadhimai Festival Main Committee members and office bearers and the local administration would be sued.

Besides, 4,000 buffaloes around 20,000 goats and chickens were also sacrifice during the festival this year.

The local administration and the police did nothing to discourage those coming to the temple for animal sacrifice, she alleged.

The police even provided security to 200 unlicensed butchers who were slaughtering animals and birds at the temple, she told journalists on Sunday during the post-Gadhimai festival press briefing in Kathmandu.

The government did nothing to quarantine the animals brought from across the border despite assurances to do so, she said. More than 200 buffalos were buried after they died of diseases, she said.

The animal sacrifice went ahead despite our month-long continuous efforts to stop the bloody ritual, she said.

However, the number of sacrifices fell from 5,000 to 4,000, she added. Our volunteers deployed in the Nepal-India border intercepted and sent back about 2,000 buffaloes to India, which were being sent for slaughter, she claimed.

The FAWN has been campaigning to stop the five-yearly mass animal sacrificing festival in Gadhimai for over two years now with the slogan "Bloodless Gadhimai."

"Sacrifice blind faith, not animals" is another slogan used by the federation. The FAWN's "Bloodless Gadhimai" campaign is supported by the Humane Society International.

The FAWN had partnered with different local bodies on the ground to implement the campaign activities, including patrolling Nepal-India border to control animal movement and coordinate with the Department of Livestock Services, Maha Gadhimai Municipality, Festival Management Main Committee and District Administration Office of Bara.

The mass sacrifice at Gadhimai Temple is said to be the cruellest form of animal slaughtering in public religious places, according to the International Organisation for Animal Protection (IOAP).

Together As One | United Singers Charitable Trust | 65 Singers , 5 Languages , One Nation , One Song