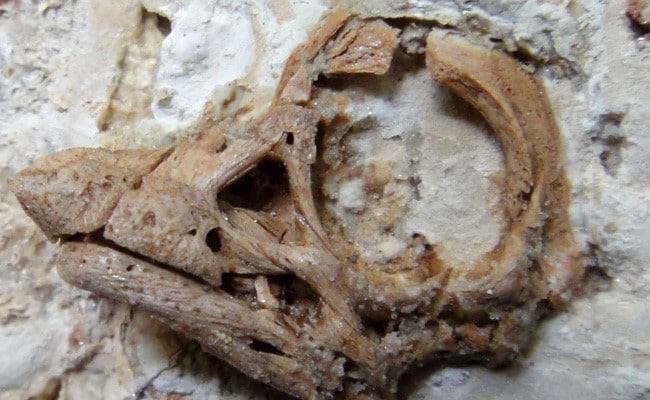 The skull of a dinosaur embryo from Argentina is providing surprising details about baby facial features present in one species from an important dinosaur group called titanosaurs that included the largest land animals that have ever lived on Earth.

Scientists on Thursday said the fragile fossil is among the best-preserved dinosaur embryonic remains ever found - a nearly intact skull about 1.2 inches (3 cm) long that has remained three-dimensional rather than being flattened during the fossilization process.

"We used to get excited about the skeletons of giant dinosaurs but it always makes a difference when we get to look inside the eggs of these giants," said paleobiologist Martin Kundrat of Pavol Jozef Safarik University's Center for Interdisciplinary Biosciences in Slovakia, lead author of the research published in the journal Current Biology.

"This does not happen so often and it remains quite exceptional to find more-or-less complete fossilized embryonic remains," Kundrat added, calling this dinosaur "the small giant."

The Cretaceous Period fossil from Patagonia is believed to be about 80 million years old. The dinosaur appears to have had specialized facial features as a hatchling that changed as it got older. Powerful imaging technology revealed unexpected characteristics including a small horn projecting from the snout as well as eyes facing forward, indicative of binocular vision.

The facial horn may have helped the dinosaur hatch from its egg like the "egg tooth" present in some hatchling birds and reptiles, but may also have served other functions such as defense or food-gathering, Kundrat said.

Titanosaurs were part of a highly successful group of plant-eating dinosaurs called sauropods known for their long necks, long tails and pillar-like legs. The largest, such as Argentinosaurus and Patagotitan, were around 120 feet (35 meters) long. The precise species to which this embryo belonged is unclear. Its skull bears similarities to a moderate-sized titanosaur called Tapuiasaurus that was roughly 43 feet (13 meters) long.

The embryo differed in facial anatomy and size from similar Patagonian titanosaur embryos.

"It is a bit unusual for a fossil to be represented just by a skull," Kundrat added. "The specimen perished before completing its development. It had undergone only four-fifths of its incubation period."