22-Year-Old Drove SUV Around Kiosks, Crashed Into Walls At US Mall 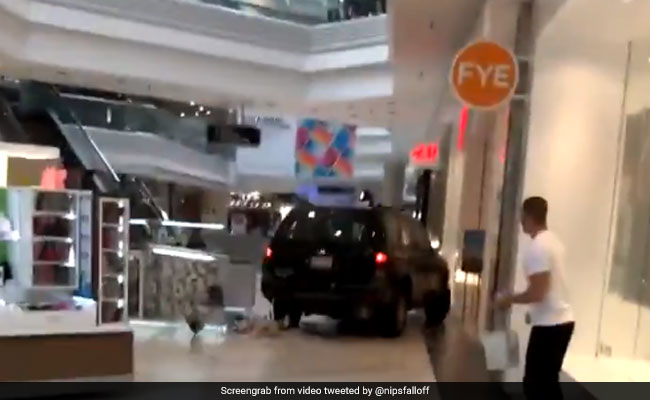 A 22-year-old man was taken into custody Friday afternoon after an SUV drove through a mall in suburban Chicago and sent shoppers fleeing for safety.

Police descended on Woodfield Mall in Schaumburg, Illinois, after receiving 911 calls around 2:20 p.m. about a black vehicle plowing through a mall entrance at Sears. The car drove though the mall's common area and came to a stop in its center court.

The man, who was alone in the car, was detained by people at the popular shopping center and two off-duty officers until authorities arrived, Bill Wolf, Schaumburg police chief, said at a news conference Friday evening. The man's name has not been released.

"There is no indication that this incident is related to any type of terrorist act," Wolf said, adding that the man did not appear to be working with anyone. "He was by himself."

Wolf said authorities had originally received reports of shots fired at the mall, but police later determined that the noise was the sound of broken glass and said there was no active shooter. The mall is expected to reopen Saturday.

Videos and posts on Twitter from people at the mall at the time revealed a chaotic scene as the SUV wove around kiosks, crashed into walls and continued driving. At one point, the vehicle paused in front of a Forever 21 store, then it moved on - just as a panicked man in a blue button-down ran in the opposite direction. One witness told CBS Chicago that the driver was navigating the car "like you would a shopping cart."

Police said three people were taken to a hospital for non-life-threatening issues, which "were not a result of the vehicle hitting anyone." No major injuries were reported. The case is being investigated with the cooperation of the FBI, Wolf said.

A video posted to social media by another mallgoer, Gloria Desiato, documented the initial moments of the frightening scene.

In the video, Desiato is Snapchatting her boyfriend when loud screeching noises and several screams can be heard. The car had just crashed into the front of the Sears store, Desiato later explained on Twitter.

Thinking the loud noise was the sound of gunshots, she raced to her car in the parking lot and sped off.

"My instinct was to get as far away as possible," she said. "I think Woodfield Mall is a safe zone for a lot of people - it's a normal mall, that's why I felt comfortable being there alone - and that's why this is just so shocking."