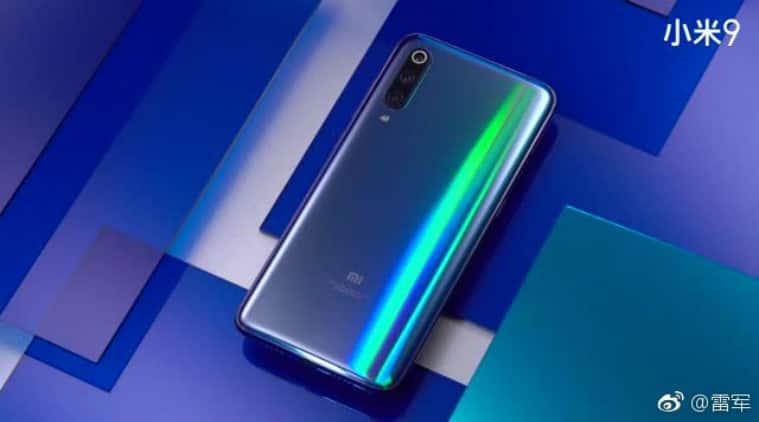 Xiaomi will take the wraps off the Mi 9 soon, and a few official renders got leaked today provides us with an early look at the flagship smartphone. Images have directly come from Xiaomi CEO Lei Jun (via Weibo), so we can vouch for their authenticity. Separately, Xiaomi’s senior vice president Xiang Wang also shared the official renders of the Mi 9.

There are a couple of things we have noticed by looking at these pictures. The most important seems to be the fact that the Mi 9 will come with a triple camera setup on the back, which is quite an improvement over the last year’s flagship. The setup reportedly consists of a 48MP primary camera, a 12MP secondary sensor, and a ToF sensor.

Another impressive feature of the Mi 9 is its design itself. According to Jun, the sky blue Mi 9 variant will show different colours of a rainbow depending on the angle and colour of light that hits it. To accomplish this, the phone undergoes a nano-scale laser holography process with a double-layer coating to achieve such a unique colour.

Notably, none of the official images show the front side of the device but we are already aware that it sports a waterdrop-style notched screen. Another aspect worth mentioning is the lack of a fingerprint scanner on the back of the device. It’s highly likely the phone will feature an in-display fingerprint scanner, like the OnePlus 6T and Huawei Mate 20 Pro.

Is blue your lucky color? Let’s #MakeItHappen on Feb. 24! https://t.co/YXCu7L5OZz

Xiaomi has already confirmed the launch of Mi 9 on February 20 in China. The Chinese company will hold another event on February 24 at Mobile World Congress in Barcelona, Spain. Nothing else is known about the Mi 9, but it won’t be long until Xiaomi makes the device official at MWC 2019. However, we do know for sure that the flagship will be powered by a Snapdragon 855 processor. Now whether the handset support 5G remains to be seen.