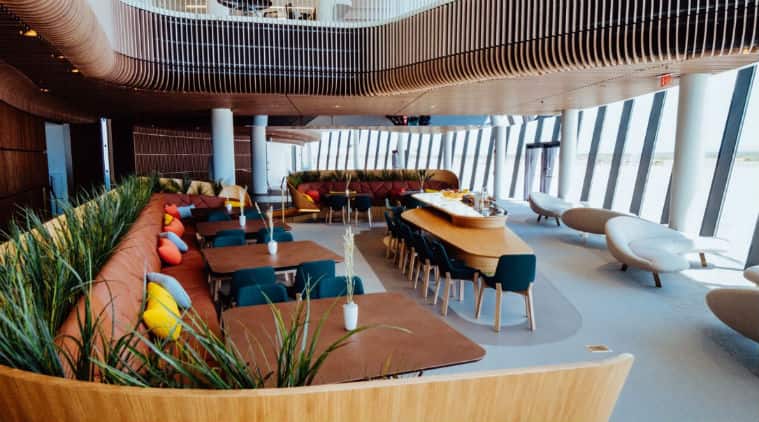 Virgin Galactic showed off its updated Spaceport America on Thursday. The taxpayer-funded facility, located in a remote part of the New Mexico desert, will serve as the headquarters for running the company’s commercial space operations.

The interior will connect customers with every aspect of the space tourism experience, including windows that provide views of the hangars, vehicles and mission control monitors. There is also a preparation area for pilots and a lounge for passengers and their family members, all designed to fit the theme of the facility’s southwestern desert location.

The control center is “primarily focused on spaceflight operations, which also incorporates communal spaces designed for use in the future by Virgin Galactic customers, along with their friends and families,” the company said in a statement.

It is all aimed at creating what Virgin officials call an “unparalleled experience” as customers prepare for the trip to space.

Virgin Galactic’s billionaire owner Richard Branson first “opened” Spaceport America in 2008. More than 600 people have since signed up to become space tourists, including several Hollywood celebrities, at a cost of $250,000 a ticket.

Customers are offered the opportunity for a few minutes in space. They will be able to float through the cabin and see the curvature of the earth through large windows.

It’s still not clear when first flights will begin, however. More test flights are needed, and the project had a major setback in 2014, when a Virgin Galactic co-pilot was killed in an accident.

From Earth to the final frontier, and back

Virgin’s rocket ship, which has reached suborbital space twice, is released at high altitude from a carrier plane. It then shoots into space at three times the speed of sound before gliding back to Earth.

“We were the first company to fly a commercial space ship to space with somebody in the back who was not a pilot — first time that somebody like that has been able to get out of their seats and float around the cabin,” said Virgin Galactic CEO George Whitesides. “So it’s happening. We have a bit more work to do before we get to commercial service.”