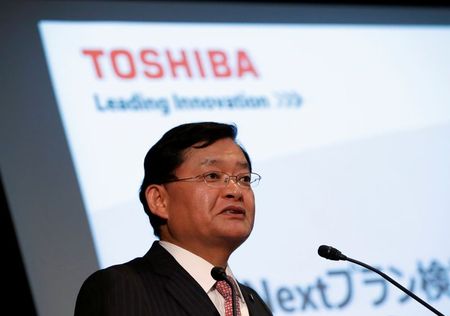 TOKYO Toshiba Chief Executive Nobuaki Kurumatani may have held onto his job but a breakdown of voting results at last week’s shareholder meeting showed a precipitous slide in support to just 58% from 99% a year earlier.

And while two activist funds fell short in their bid to add a total of 5 nominees to the board, one nominee – Yoichiro Imai, the co-founder of activist fund and Toshiba’s top shareholder Effissimo Capital Management – gained substantial backing with 43% of the vote.

Both results, disclosed on Tuesday, indicate that pressure from activist funds on the beleaguered Japanese industrial conglomerate is likely to remain for some time.

Singapore-based Effissimo, which owns a 9.9% stake, had sought additional directors, citing fictitious transactions Toshiba disclosed this year as evidence that its corporate governance has not made significant progress since a major accounting scandal in 2015.

Toshiba has been under pressure from activist funds since it sold 600 billion yen ($5.6 billion) of stock to dozens of foreign hedge funds during a crisis stemming from the bankruptcy of its U.S. nuclear power unit in 2017.