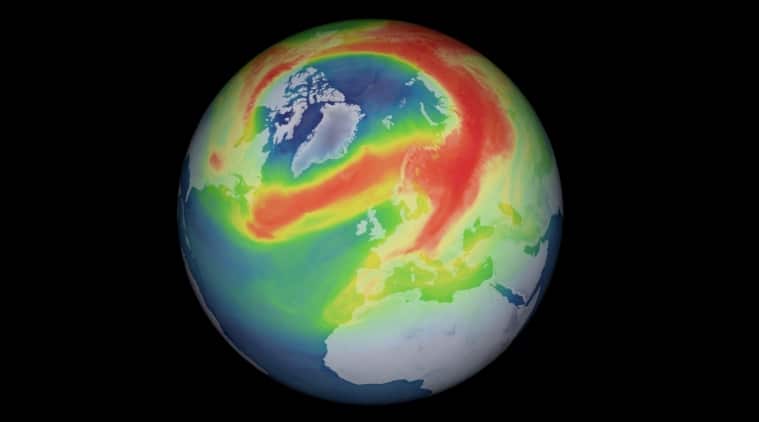 Scientists spotted an unusual hole in the ozone layer over the Arctic. (Image source: Copernicus data (2020) processed by DLR/BIRA/ESA)

Scientists have noticed a strong reduction of ozone concentrations over the Arctic. This ‘mini hole’ in the ozone layer is believed to have been caused by unusual atmospheric conditions, including freezing temperatures in the stratosphere.

The ozone layer is a protective layer of gas in the stratosphere that shields Earth from the Sun’s harmful ultraviolet radiation that can otherwise cause skin cancer and cataracts along with other environmental issues.

As per a press release shared by the European Space Agency (ESA), scientists from the German Aerospace Center (DLR) used data from the Copernicus Sentinel-5P satellite to notice the unusually strong depletion of ozone over the northern polar regions. Mini ozone holes over the North Pole aren’t rare, but the depletion over the Arctic this year is much larger compared to previous years.

What caused this unusual ozone hole over the Arctic

As per the ESA, cold temperatures (below -80°C), sunlight, wind fields and substances such as chlorofluorocarbons (CFCs) are responsible for the ozone layer. Even though both the north and south poles of the planet endure ozone losses during winter, the Arctic’s ozone depletion tends to be significantly less than Antarctica.

Although Arctic temperatures do not usually fall as low as in Antarctica, this year, powerful winds flowing around the North Pole trapped cold air within what is known as the polar vortex— a circling whirlpool of stratospheric winds.

“By the end of the polar winter, the first sunlight over the North Pole initiated this unusually strong ozone depletion—causing the hole to form. However, its size is still small compared to what can usually be observed in the southern hemisphere,” the report said.

The extent of the Arctic ozone hole

ESA’s Copernicus Sentinel-5P mission manager Claus Zehner said, “The Tropomi total ozone measurements are extending Europe’s capability of the continuous global ozone monitoring from space since 1995. In this time, we have not witnessed an ozone hole formation of this size over the Arctic.”

Express Tech is now on Telegram. Click  and stay updated with the latest tech news

Diego Loyola from the German Aerospace Centre said that the Arctic hole is expected to be closed again during mid-April 2020.

As per the Scientific Assessment of Ozone Depletion data of 2018, the ozone layer in parts of the stratosphere has recovered at a rate of 1-3 per cent per decade since 2000. “At these projected rates, the Northern Hemisphere and mid-latitude ozone is predicted to recover by around 2030, followed by the Southern Hemisphere around 2050, and polar regions by 2060,” the report said.