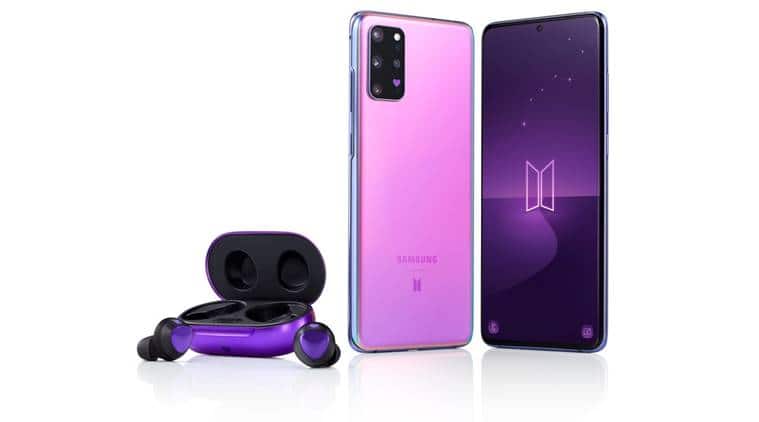 Samsung has launched its S20+ BTS Edition in India alongside the Galaxy Buds+ BTS Edition. The specifications of the new Samsung variant is not different from the version launched earlier in 2020. The Samsung S20+ BTS Edition has a dreamy haze purple coating along with the famous band’s logo engraved on the bag. There’s also a heart on the large camera setup on the smartphone.

The unboxing appearance of the new S20+ variant will be different as well as it has the BTS logo and hearts drawn on it. Not just the colour of the phone, the BTS edition will also have preloaded themes inspired by the South Korean band. It will also feature seven collectable BTS photo cards, unique stickers, lock screen etc.

The new Galaxy Buds+ will have the same colour coated on them partially along with a purple heart and BTS logo on it. However, the charging case of the buds will be purple instead of the normal black or white.

Samsung S20+ has a quad-camera setup. It includes a 64MP main camera module, which also includes a 12MP ultra-wide angle and another 12MP wide-angle lens as well as a depth sensor. It has a 6.7-inch AMOLED display with Quad HD+ resolution. It is powered by Exynos 990 octa-core processor coupled with 8 GB RAM and 128 GB storage in the base variant and runs on a 4,500 mAh battery. The storage is expandable up to 1 TB via microSD card.