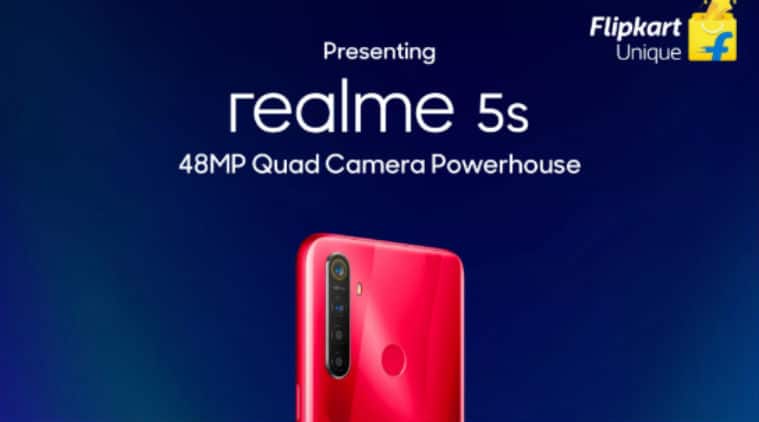 Realme 5s will launch in India in India on November 20, alongside Realme X2 Pro. The phone will likely be exclusive to Flipkart as the e-commerce site already has a teaser page live for the phone ahead of the official launch with ‘Flipkart Unique’ branding. It reveals that Realme 5s will have 48MP quad-camera system. The phone will feature a crystal back design, just like its predecessor Realme 5.

Realme 5s will be unveiled on the same day as the company’s flagship Realme X2 Pro, which will have a 64MP quad-camera setup. Realme 5s will feature a vertical rear camera setup aligned at the top left, similar to Realme 5 and LED flash unit beside camera setup. A circular fingerprint sensor will be placed in the center.

Realme 5s will be an upgrade in terms of the rear camera from a 12MP quad-camera setup on Realme 5. The 12MP main sensor on Realme 5 is accompanied by an 8MP secondary sensor with 119-degree ultra-wide-angle field of view. There’s also 2MP ultra macro lens and 2MP Portrait mode sensor, each with f/2.4 aperture.

Realme 5s will come with a 48MP quad-camera setup. Whether the rest of the three sensors will be the same as Realme 5 remains to be seen. Flipkart also showcased a new red colour variant for the new phone, which is not there for Realme 5 as it comes in blue and purple colour options.

Realme X2 Pro will also launch alongside Realme 5s. The latter will be a budget device, while the former will be a premium flagship which will compete with the likes of Redmi K20 Pro, OnePlus 7. Realme X2 Pro will be powered by the latest Snapdragon 855+ processor and come with up to 12GB RAM. Among other key specifications are 50W SuperVOOC Flash Charge support, 64MP quad-camera setup at the back, and 4,000mAh battery.