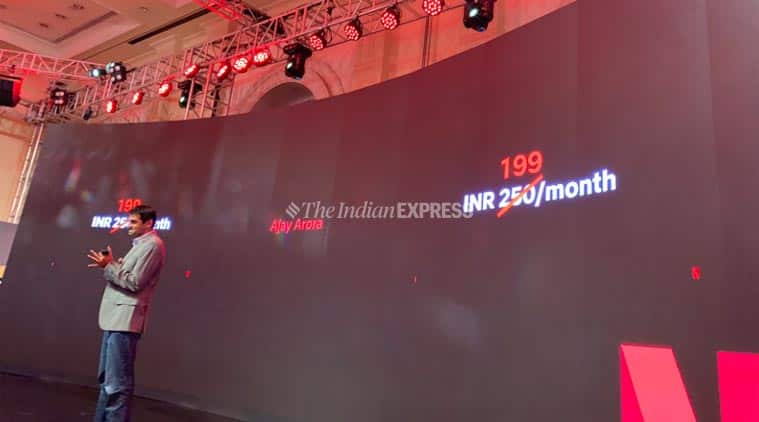 Netflix has revealed its third quarter results for 2019, and in its company statement said that the India-specific mobile only plan has fared better than expected. Netflix introduced a Rs 199 per month mobile only plan in India in July this year. This was the first time Netflix had a plan for mobile subscribers, starting at such a low price. The earlier basic monthly plan started at Rs 499, which made Netflix one of the more expensive streaming services in India, though it still remains one of the most expensive in the market.

In its letter to shareholders, available on the Netflix investor relations site, the company notes that they want to make “easier for future members to sign up and enjoy Netflix,” and the mobile only plan was rolled out to that end. The letter notes that the results have been encouraging.

“Our approach with pricing is to grow revenue and so far, uptake and retention on our mobile plan in India has been better than our initial testing suggested. This will allow us to invest more in Indian content to further satisfy our members,” notes the letter.

However, the letter also states that while this is only a very small percentage of Netflix’s total subscriber base, the company will continue testing mobile-only plans in other markets. According to the statement, the second Season for Sacred Games was also the most watched in India for Netflix. The second season was released on August 15, 2019.

The total revenue for Netflix in the third quarter stood at $5.24 billion. In India, Netflix plans start at Rs 199 going up to Rs 799 per month. In comparison services like Hotstar cost Rs 999 for the entire and Amazon Prime Video is bundled with Amazon Prime at Rs 999 per year as well. The monthly plan for Amazon Prime is Rs 129, which is still lower than Netflix.

What is the Netflix Rs 199 per month mobile plan?

The Netflix Rs 199 per month plan is only for mobile subscribers. It only users to stream content on only one screen at a time, and is restricted to standard definition, which means 480p. The plan does not support 720p or HD content streaming.

Also access is limited to one screen at any one time. The first month is still free as part of the trial period offer. The option to download Netflix is available on this plan as well. The plan does not support casting to a TV.