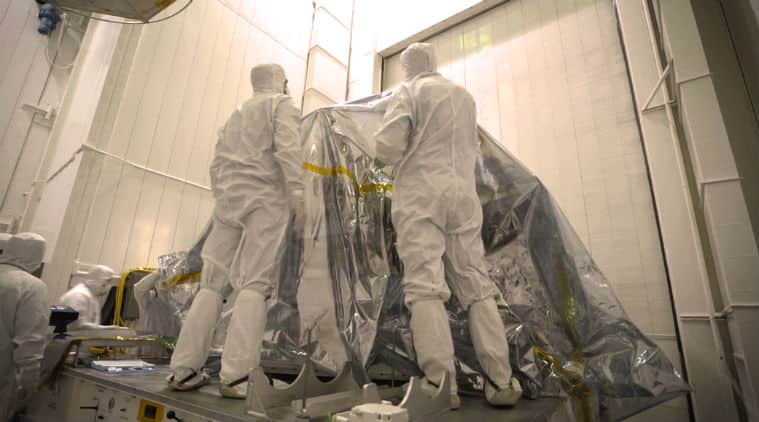 Engineers at NASA have pulled the wraps off its Mars 2020 rover after it was relocated from the agency’s Spacecraft Assembly Facility to the Simulator Building located at Jet Propulsion Laboratory (JPL) for being tested. The agency has released a time-lapse video that was taken earlier this month where bunny-suited engineers are seen removing the inner layer of protective antistatic foil on the Mars 2020 rover.

“The Mars 2020 rover will be collecting samples for future return to Earth, so it must meet extraordinary cleanliness measures to avoid the possibility of contaminating Martian samples with terrestrial contaminants,” Paul Boeder, contamination control lead for Mars 2020 at JPL said in a statement.

The scientists, after removing the first layer of antistatic foil, used 70 per cent isopropyl alcohol to wipe down the rest of the layer along with the trailer which is carrying the rover. The rover was later moved into the larger main room of the Simulator Building.

“To ensure we maintain cleanliness at all times, we need to keep things clean not only during assembly and testing, but also during the moves between buildings for these activities,” Boeder added.

The US space agency has said that in the coming weeks, the Mars 2020 rover will enter a giant vacuum chamber for surface thermal testing, which is going to evaluate the systems, instruments and subsystems in a frigid and near-vacuum environment which is found in Mars.

NASA aims to land humans on Mars by 2035

The Mars 2020 rover is being built and will be operated by NASA’s JPL. It will be launched in July next year on a United Launch Alliance Atlas V rocket which will take off from Cape Canaveral Air Force Station.

The rover is scheduled to land at Jezero Crater on Mars on February 18, 2021. If the mission successfully lands on the red planet it will become the first spacecraft with an ability to accurately retarget its touchdown point during the sequence of landing.

Earlier this month, the space agency had also performed a .

In the near term, the US space agency is working towards sending humans back on the Moon by 2024 through its upcoming Artemis lunar mission. The agency plans to prolong the presence of humans on the lunar region by 2028. It is also trying to develop a Gateway which is a planned space station that would be placed in the Moon’s orbit and is going to work as a hosting ground for future landing missions.

Apart from this, earlier this week NASA Administrator Jim Bridenstine in a panel discussion at the International Astronautical Conference (IAC) said that humans can be landed on Mars by 2035.