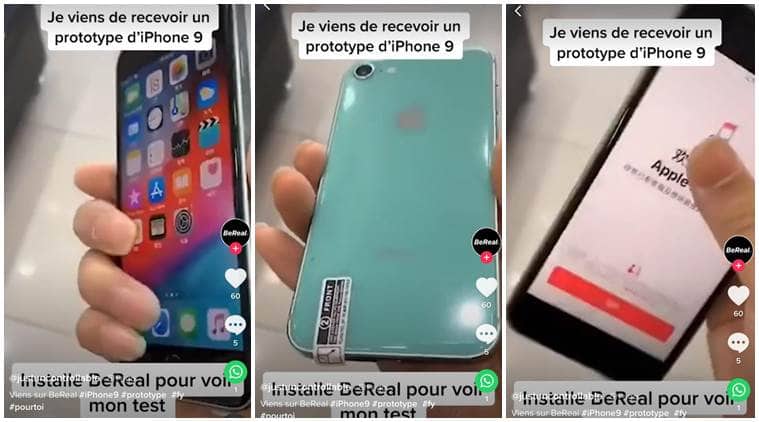 The iPhone 9/SE 2 is one of the several devices Apple plans to launch in the first half of 2020. (Screenshot: TikTok)

Suspense continues to prevail over the existence of the iPhone 9, Apple’s so-called low-cost “budget” iPhone. Rumours suggest that the iPhone 9/SE 2 will feature a similar design to that of the iPhone 8, complete with a 4.7-inch screen and a physical home button. But a new video uploaded on TikTok hints at a “new” design rather than what was anticipated — a rehashed iPhone 8.

The iPhone 9 in the video looks like a thinner and taller version of the iPhone 4, with slightly flat edges and sharper lines. The device in question has chunky bezels and all-glass back, alongside a physical home button with Touch ID. The phone in the video only features a single rear-facing camera, while a charging port sits on the bottom between the speaker grills. Surprisingly, the alleged “low-cost” iPhone 9 does not feature a headphone jack, similar to the iPhone XR and iPhone 11.

As pointed by 9to5Mac, the iPhone 9 featured in the video does not look like a prototype handset. Usually, every Apple prototype device would likely have a “Proprietary and Confidential” displayed on the lock screen. That does not appear on this unit, which casts doubt over the legitimacy of the iPhone 9. Meanwhile, Apple Insider points out that the operating system installed on the iPhone 9 does not match iOS. There’s a chance that this iPhone could be running Android with an iOS-like skin on top.

Stefan Constantine downloaded the iPhone 9 video floating on TikTok and later shared it on Twitter.

The iPhone 9/SE 2 is one of the several devices Apple plans to launch in the first half of 2020. It’s being reported that Apple could hold an event on March 31, where it will unveil the iPhone 9. Many have speculated that the iPhone 9 could be launched as a successor to the iPhone SE, which made its debut in 2016. The iPhone 9 is rumoured to cost $399 (roughly Rs 28,624).

Must read| Realme X50 Pro 5G is coming, but are we ready

While the iPhone 9 is on track to release in March, but some reports claim that launch might be pushed back to the deadly Coronavirus epidemic. According to a report from Nikkei Asian Review, the low-cost iPhone may not launch in March as planned as the company because of supply constraints.

Samsung urges all employees to work from home 'where possible'