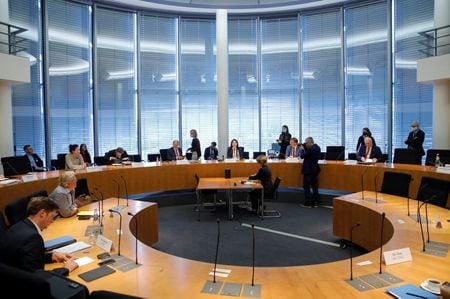 BERLIN German lawmakers on Wednesday questioned Finance Minister Olaf Scholz over his failure to detect and prevent the Wirecard accounting scandal, one of the biggest in post-war history.

Prosecutors have arrested former Wirecard Chief Executive Markus Braun and two other former executives on suspicion of orchestrating a years-long criminal racket to inflate revenue and balances to hide losses dating back at least to 2015.

Scholz entered the closed-door meeting in the parliament’s finance committee without giving a statement to reporters, but he earlier told public broadcaster ARD that no mistakes had been made.

“What has to be done has been done,” Scholz said, adding that a big, internationally renowned accounting firm had also not detected the irregularities at Wirecard for many years.

Scholz last week rushed out a reform agenda that would give financial watchdog BaFin greater investigative and enforcement powers, broaden its mandate to cover non-banking financial institutions, and toughen penalties against lax auditors.

Florian Toncar, a lawmaker from the opposition pro-business Free Democrats (FDP), accused the government of failing for years to detect the massive accounting scandal.

Fabio De Masi, a lawmaker from the opposition Left party, called for the installation of a more formal investigative committee in parliament to bring to light who exactly knew what at which time and therefore had to be held accountable.

For Scholz, the scandal comes at an unfavorable time, as he hopes to become the lead candidate of his Social Democrats (SPD) to replace Chancellor Angela Merkel in a general election next year.