Solar Eclipse 2019 Date and Time in India: The last solar eclipse of the year 2019 is going to take place a day after Christmas– on December 26, 2019. The celestial event will fall over the Eastern hemisphere of the earth and visible from India, Saudia Arabia, Qatar, Malaysia, Oman, Singapore, Sri Lanka, Marina Islands, and Borneo.

The final solar eclipse of the year is also going to be an annular one that forms a “ring of fire” in the sky. A solar eclipse happens when the Moon comes between the path of the Sun and the Earth, casting its shadow on the planet. An annular eclipse is quite different from a total solar eclipse in the sense that the Moon blocks the Sun from the centre but leaves the rims visible, creating a ring of fire.

The full eclipse will end by 12:30 pm and by 1:35 pm, the moon will leave the edges of the Sun, ending the partial eclipse. Notably, the timings may differ a bit for every region. 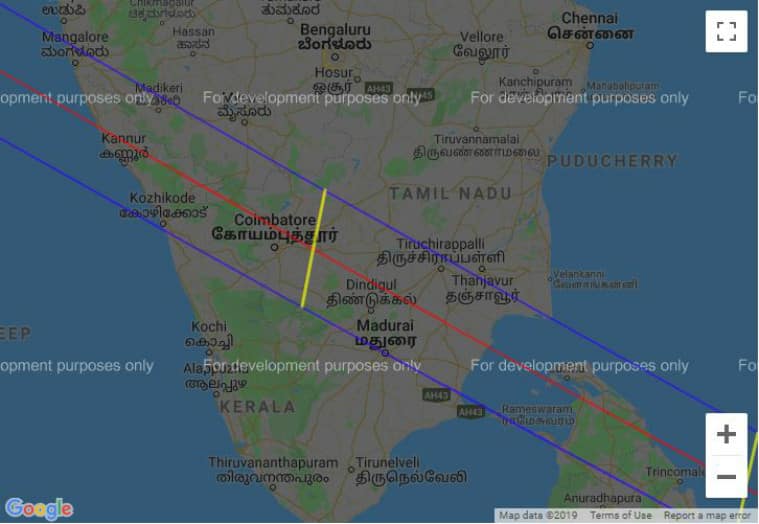 Solar Eclipse 2019 Date: NASA tracks the path of the annular eclipse of December 26 on Google Maps.

Where to watch the annular solar eclipse 2019

As per Eclipseportal, the annular solar eclipse of December 26 will begin around 180 kilometres west of Dammam in eastern Saudi Arabia. In India, the eclipse will reach from the west coast of Southern India and Coimbatore will be the first major city to see the annular eclipse.

NASA’s map on the December 26 eclipse suggests that the path of the eclipse will cross in a south-easterly direction. Cities falling on the eclipse’s path across Karnataka, Kerala, and Tamil Nadu will also be able to see the “ring of fire”. It is advised not to see the eclipse with naked eyes and use solar eclipse glasses instead of ordinary polaroid filters.

If you are in a region where you cannot witness the final solar eclipse of 2019 directly, you can head over to the Slooh.com website. You can watch the live stream of the eclipse on the website around 8:30 am IST.