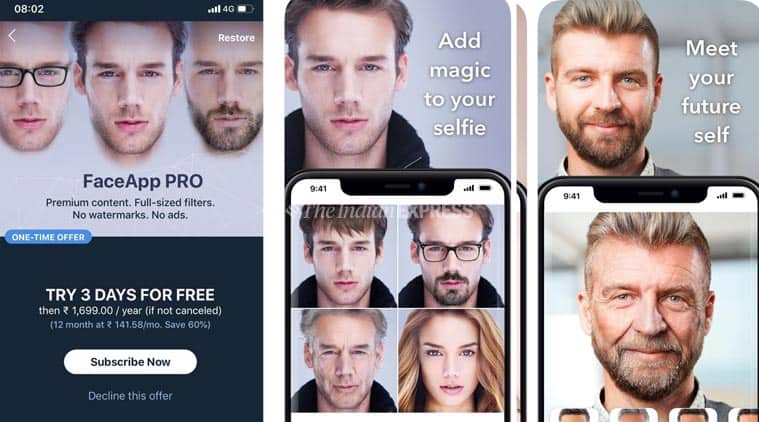 If your Instagram Stories or Twitter feed is filled with people looking older than their current age, you can thank an app call FaceApp for this. FaceApp which was launched back in 2017 appears to have gone viral again with the ‘old filter’ being tried by many users who are posting these photos.

FaceApp as TechCrunch points out uses on Artificial intelligence or AI to add filters to your photos and was built by Russian developers. It relies on neural networks to edit selfies for different kinds of filters. While the getting old filter has gone viral now, the app also has other features like adding a smile, looking younger or more beautiful with other filters, according to an earlier report on TechCrunch.

The app is available on both iOS and Android, but this is not a free app. After three days you have to pay to use the app on iOS. In India, the app’s price is Rs 1,6999 per year. Popular YouTube MKBHD posted a tweet sharing his edited photo via FaceApp on Twitter. IGN posted edited photos of the Avengers on Twitter. Check out some of the tweets with edited photos below:

You kids today don’t know what it was like to PLUG IN HEADPHONES pic.twitter.com/HogXHiRYKZ

Avengers but with the FaceApp aging filter pic.twitter.com/XYSNtyrcN4

While the app appears to be some harmless fun, other users have pointed out to terms and services of FaceApp, which also captures the users face and private data.  The license terms of the app have been highlighted which state that using this app, the customer is granting the app permission to use their photos, name, username, and likeness for any purpose, including commercial purposes.

Screenshots of the terms and services were shared by Elizabeth Potts Weinstein on Twitter who is a lawyer and pointed out that the app’s policy is not remotely GDPR compliant.

#Warning: Every few years, the #FaceApp comes around.

It’s fun.
It draws a lot of people in.
But, it also captures your face along with some of your private data.
It doesn’t tell us what it does with that data.

If you use #FaceApp you are giving them a license to use your photos, your name, your username, and your likeness for any purpose including commercial purposes (like on a billboard or internet ad) — see their Terms: https://t.co/e0sTgzowoN pic.twitter.com/XzYxRdXZ9q

The report on TechCrunch also pointed out how on iOS the app was able to access the photo library, even when the privacy option for Photos access is set to Never on iOS.

While the report says there is no evidence that the app is uploading the user’s camera roll to their services, it appears that the app can access a photo, when a user taps on it thanks to Apple’s API.

Apple API allows developers to access the photo, if the user intent indicates that they want to share it.  The report says that user intent is what matters and that’s how FaceApp is accessing the photos on iOS, even when the default privacy setting for Photos access is restricted to Never.

Disney+ Hotstar Is Now Finally Streaming In 4K On Your Android TV, If You Have A 4K TV That Is