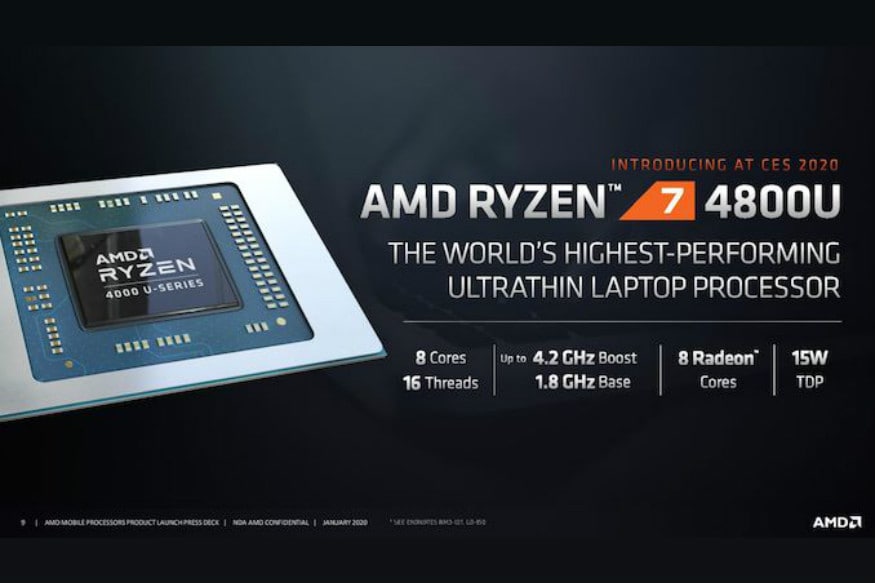 AMD has unveiled its first 7nm laptop processors, which incidentally also happen to be the world's first 7nm laptop processors. This has helped AMD go one up on Intel at least for the time being, until Intel comes back with its own set of offerings. With the new processors, AMD has improved its chipset fabrication standard from 12nm to 7nm, under the all new AMD Ryzen 7 4000 series processors. The new processors will directly rival Intel's 10th gen Ice Lake (10nm) processors, and at its launch at CES 2020, AMD has gone ahead and presented a direct comparison between the AMD Ryzen 7 4800U and Intel's Core i7-1065G7 processors.

According to AMD, the Ryzen 7 4800U will offer a 4 percent improvement in single core performance, 28 percent improvement in integrated graphics performance (with the Ryzen 7 4800h graphics chip for laptops) and impressively, a massive 90 percent multi-thread performance improvement, over the Intel Core i7-1065G7. It is interesting to note that AMD chose the 'U' variant for this comparison, when ideally, its 'H' variant (designed for gaming/productivity laptops) would offer even better performance. Intel, on the other hand, presently offers its 10th generation processors in two different node architecture — 10nm for high end laptops, and 14nm for mid-range and basic laptops.

In a bid to convince buyers, AMD has already made mention of a few laptops that should launch by mid-February, including the Lenovo Yoga Slim 7 and the ASUS Zephyrus G14 gaming laptop — both belonging to two completely different sections of the laptop industry. AMD has also mentioned over 10 more laptops launching with its new 7nm computing platform by the end of March 2020, and by end-2020, the chipmaker expects to see over 100 laptop SKUs being powered by the 7nm AMD Ryzen 7 4000 processors.

The 7nm node is also coming to GPUs, and AMD has, on this note, unveiled the Radeon RX 5600XT GPU for desktops. In benchmarks shared during the marketing presentation, the AMD Radeon RX 5600XT is seen to exceed the performance on offer by Nvidia's GeForce GTX 1660Ti by over 12 percent at least, showing considerable performance improvement. The desktop class GPU will be available from January 21, at a suggested retail price of $279 (~Rs 20,000). OEM-specific SKUs of the same, along with a laptop-class discrete graphics option based on the RX 5600XT, should also be unveiled in the months to come.