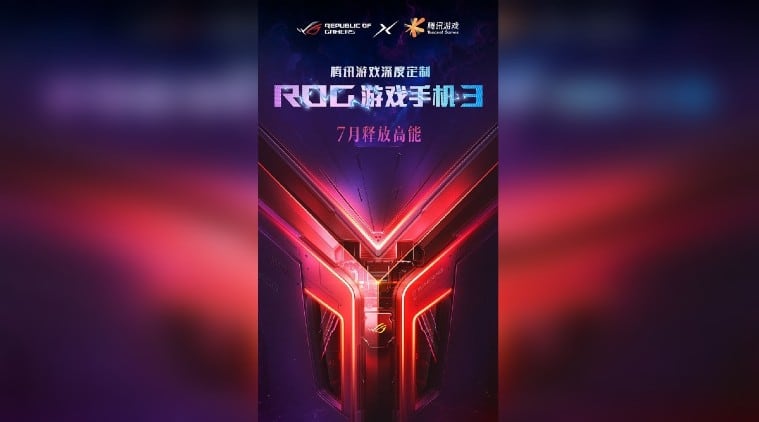 The poster also states that the company has partnered with Tencent to manufacture the new smartphone. (Image: Weibo)

The poster also states that the company has partnered with Tencent to manufacture the new smartphone. Today we will be looking at everything we know about the upcoming Asus ROG Phone 3.

In the teaser poster, posted by Asus on Weibo, we can see the name of the phone and that it will be launched in July in partnership with Tencent in China. The poster does not mention an exact date for the launch.

Also Read: Asus ROG 2020 series of laptops is playing for the attention of Gen Z

The company has not revealed when will the device launch in international markets like India. However, seeing its track record, we can say that it will be launched within two to three months of the China launch. But, considering the COVID-19 situation, there might be some delays in the launch of the device.

We expect the company to keep the prices similar to what they were with the ROG Phone 2.

Not much is known about the upcoming ROG Phone 3. However, the company has confirmed that the ROG Phone 3 will be powered by the Qualcomm Snapdragon 865 processor paired with the Adreno 640 GPU.

To recall, the ROG Phone 3 recently appeared on TENAA, revealing key specifications. According to the listing, the ROG Phone 3 will sport a 6.9-inch AMOLED display with a resolution of 2340×1080 pixels and a 19.5:9 aspect ratio. It is expected to feature a 144Hz refresh rate, however, that has not been confirmed.

It is being said that the device will come with 8GB, 12GB and 16GB of RAM along with 128GB, 256GB and 512GB internal storage. It will run Google’s latest Android 10 operating system with the company’s own ROG UI on top. All of this will be backed by a 6,000mAh battery with support for 30W fast charging.

The device will feature a triple camera setup on the back, consisting of a 64MP primary sensor. On the front, it will reportedly feature a 14MP sensor for taking selfies.

Some reports also state, the ROG Phone 3, just like its predecessors will feature a secondary USB Type-C port on the left-hand side to attach accessories.