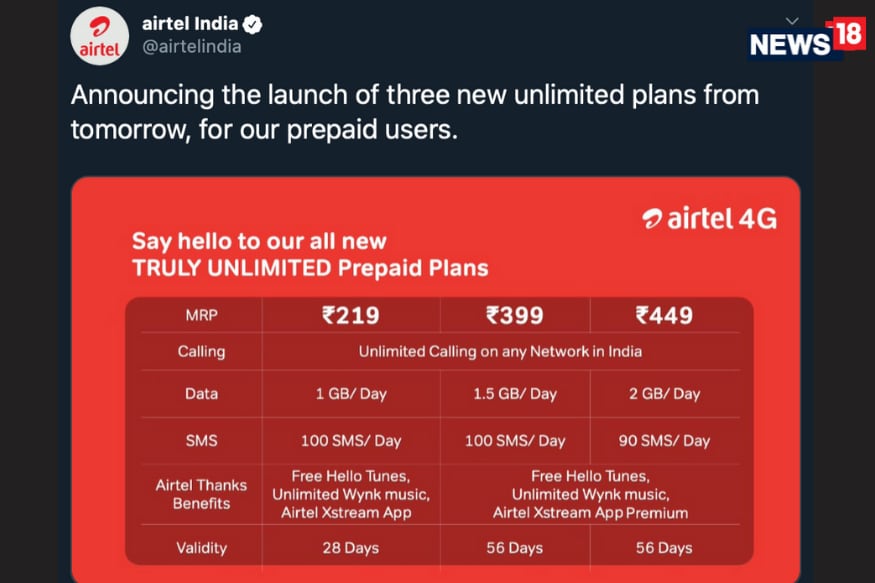 Airtel has added three new prepaid recharge options to its already reconfigured line-up that has eliminated the fair usage policy (FUP) for calls made to numbers outside the Airtel network. These new recharge packs, priced at Rs 219, Rs 399 and Rs 449 are now a part of the new recharge options, and are available in 28 days validity and 56 days validity options. Rivals Vodafone Idea have also confirmed that they are reconfiguring the new prepaid recharge packs to include unlimited voice calls to all networks across India.

The Rs 219 plan is valid for 28 days and bundled 1GB data per day as well as 100 SMS per day and subscriptions to Airtel Xstream and Airtel Wynk Music streaming platforms. All voice calls to other networks, including Reliance Jio and Vodafone, are completely unlimited and free. The Rs 399 plan has a validity of 56 days and offers 1.5GB data per day. If you need more data, then the Rs 449 plan could be a better bet, with a validity of 56 days but bundling 2GB data per day. The Rs 399 and Rs 449 plans bundle the subscription to Airtel Xstream Premium video streaming platform. Airtel is also offering Rs 150 cashback if you buy a new FASTag for your car from the Airtel Payments Bank.