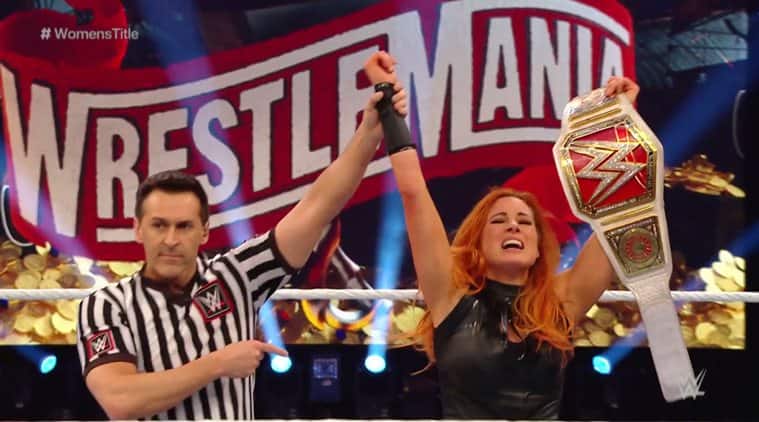 WWE WrestleMania 2020 results: With popular sporting events taking a halt worldwide amidst the coronavirus crisis, WWE presented its fans with a unique WrestleMania event in history. The two-day event kicked off with Alexa Bliss and Nikki Cross taking on The Kabuki Warriors and the action got more intense as the night progressed.

Here is what happened on Day 1 of WrestleMania 36

Becky Lynch vs Shyna Baszler: With the Raw Women’s Championship on the line and it was probably the toughest challenge for Becky Lynch. The match kicks-off with Shyna Baszler hitting Lynch with a Karifuda Clutch. However, as the action shifts to the ringside, the champion (Becky Lynch) tries to make a comeback in the contest after hitting a powerbomb on her opponent.

She then goes on to connect a dropkick on Baszler and knocks her with a series of stomps. But as mentioned earlier Baszler is a tough candidate and she makes her way back into the match with a big knee on Lynch. She then tries to seal the contest by locking Lynch with a dis-arm-her, which Lynch somehow manages to escape.

Baszler continued the brutality on the champ and swings her head-first into the announce table. As Baszler tries to lock Lynch with another Karifuda Clutch inside the ring, the champion counters the move, rolling backward to convert it into a pin and successfully retain her Raw Women’s Championship.

King Baron Corbin vs Elias: WWE’s king Baron Corbin made his way to the ring, anticipating Elias was nowhere to be seen after being brutally assaulted a week ago on SmackDown. As the King calls out for an official to declare him the winner, the guitar music plays in the background leaving Corbin surprised. He then goes out to attack Elias on the ramp but his move backfires as Elias knocks Corbin with his guitar.

Both the superstars then make their way to the ring and the contest officially starts with Corbin dominating the initial phase of the match. He maintains the momentum and tries to wrap the contest, using the ropes as a leverage on a late pin.

However, the referee just sees the advantage in time, thus leading Corbin in an argument with the official. Elias takes advantage and score up a roll-up holding Corbin’s tights to snatch a win.