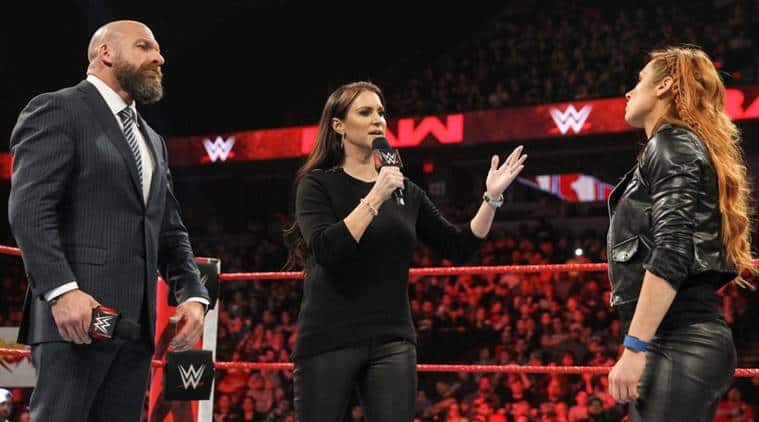 Becky Lynch’s recent actions of attacking Stephanie McMahon and Triple H – both WWE officials now – hasn’t gone down well with the ‘Supremo’ Vince McMahon. Even though she swallowed her pride and apologised to the McMahon family for the attacks, she has been suspended for 60 days. Keeping that in mind, as per Vince’s decision, Charlotte Flair will replace ‘The Man’ in her scheduled Raw Women’s Championship Match against Ronda Rousey at WrestleMania.

At the start of WWE Raw on Monday (February 11), it was made clear Lynch had seen the doctor and had the go ahead to compete at WrestleMania. But, she had to apologise for her recent attacks. There was plenty of incentive in doing so – Becky’s own doctors and WWE’s officials concurred that her tweaked knee would be good to go with a little bit of rehab, and Triple H apologised for his own insults toward The Irish Lass Kicker.

But despite the promise of a clean slate, Lynch wasn’t exactly pleased to be told to apologise, given that she had done what was asked and gotten herself cleared. So, after another heated confrontation where Becky and Stephanie nearly came to blows, The Game switched his tactics and made things ultra clear: apologise by end of the night or lose it all.

At the end of the night, after being advised by the likes of Finn Bálor, Alexa Bliss and even Ronda Rousey — Lynch did what she had to do to keep her WrestleMania match alive and apologised to Triple H and Stephanie McMahon. While the duo accepted the apology, Vince didn’t.

Mr. McMahon emerged with just minutes to go in the broadcast, and he had harsh words for Becky’s “bad attitude” and apparent belief that she was bigger than WWE. “You’re not The Man, I’m The Man,” The Chairman declared before throwing down a 60-day suspension for Lynch that expires five days after WrestleMania. It meant, Rousey needed a new challenger — a Superstar, Mr. McMahon said, who would stick to their lane. The woman in question turned out to be Charlotte Flair, who emerged after a glowing introduction from The Chairman with a smile on her face while Becky fumed in the ring.

The Chairman made it clear where his allegiance lies as he raised The Queen’s hand as Raw went to black — a preview, he said, of what awaits Rousey at WrestleMania.

Mr. McMahon suspended Becky Lynch and replaced her with Charlotte Flair at WrestleMania