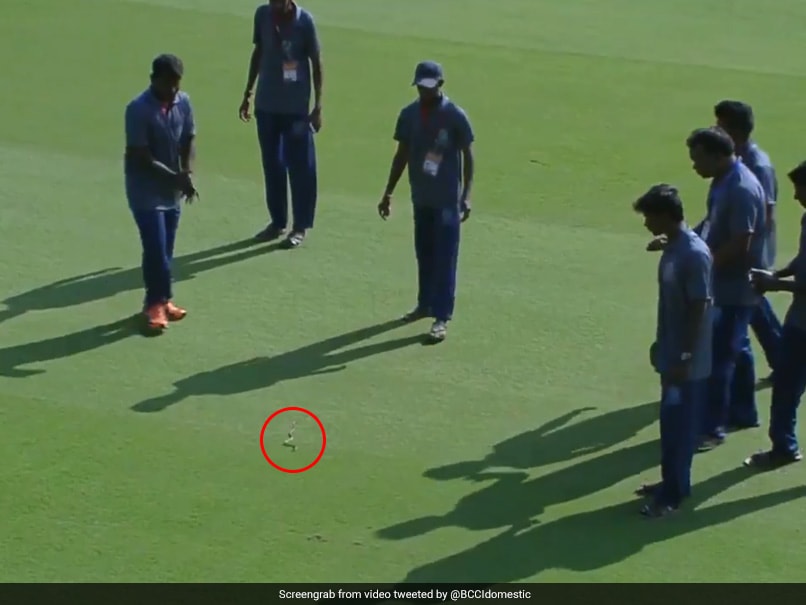 The start of the Andhra vs Vidarbha Ranji Trophy Group A cricket match being in Vijayawada was delayed after a snake made a visit to the ground. The official Twitter handle of BCCI Domestic posted a video of a snake slithering around in the field even as the players watched on with bewildered faces. Fortunately, the match resumed soon enough. Vidarbha captain Faiz Faizal won the toss and elected to bowl against Andhra, who are being captained by India international Hanuma Vihari.

Watch the video of the snake invading the field and delaying the start of the match on Day 1:

SNAKE STOPS PLAY! There was a visitor on the field to delay the start of the match.Follow it live - https://t.co/MrXmWO1GFo#APvVID @paytm #RanjiTrophy pic.twitter.com/1GptRSyUHq

Ranji Trophy, India's premier domestic competition, got underway on Monday for the 86th time. The top five teams from Group A and Group B combined will progress to the knockouts with the top two from Group C and the top team from the plate group joining them.

Faiz Fazal-led Vidarbha are gunning for their third Ranji Trophy title in a row but won't find the going easy against a strong Andhra side.

Andhra, however, made a poor start after being put into bat.

CR Gnaneshwar fell prey to Rajneesh Gurbani after scoring only 8 runs while his opening partner Prasanth Kumar was cleaned up for just 10 by Yash Thakur. The loss of their two openers, left Andhra reeling at 38 for two but captain Hanuma Vihari, who has put in some impressive performances for Team India in Test cricket, steadied the ship and took them past the 50-run mark without any more losses.

At the time of writing, Andhra were 58/2 after 26 overs with Ricky Bhui giving company to Hanuma Vihari.