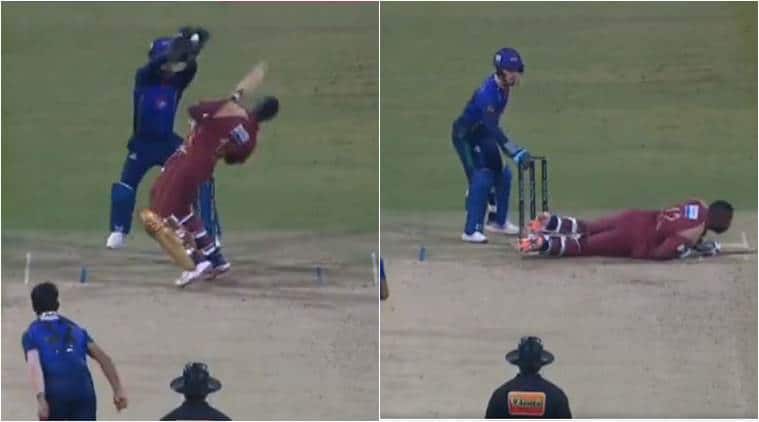 Afghanistan spinner Qais Ahmad found a new way to stop Andre Russell from hitting boundaries in the T10 league clash between Bangla Tigers and Northern Warriors at Sheikh Zayed Stadium, Abu Dhabi on Wednesday. Ahmad bowled a seam-up bouncer to Russell surprising him to an extent that the Caribbean fell on the ground trying to evade it.

The 19-year-old spinner immediately apologised for the bouncer as Russell was not wearing a helmet and barely escaped a blow to his head. Wicketkeeper Tom Moores did well behind the wickets too, holding on to the bouncer from a spinner.

The Caribbean giant was shell-shocked as he looked at the spinner lying on the crease. The 31-year-old signalled to the dugout and asked for the helmet as he got back on his feet.

Come for the leg-spin bouncer. Stay forever for the glovework pic.twitter.com/8rfrGGpQy0

Ahmad bowled a terrific spell under pressure. He finished his spell with one wicket for 13 runs in two overs. Russell could score only four runs from seven deliveries bowled by Ahmad.

The Northern Warriors batsman was destructive against other Bangla Tigers bowlers. He scored 41 runs from 25 deliveries including three fours and three sixes. He top-scored for Nothern Warriors chasing a target of 103.

Russell got out in the penultimate over to Sri Lanka’s Thisara Perera. Northern Warriors needed 22 more runs from eight deliveries after his wicket. They lost the match by six runs as Sam Billings could not finish the game.

David Wiese got named ‘Man of the Match’ for defending 13 runs in the last over. Wiese got the wicket of Darren Sammy and Chris Green off the first two balls to take the game away from the opposition.