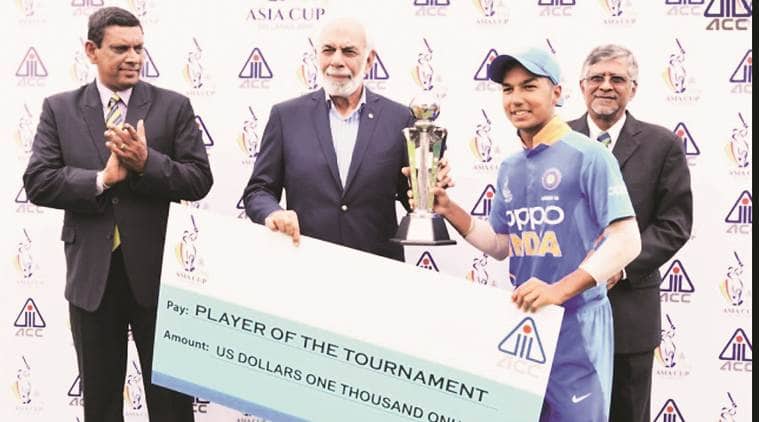 Two months after bagging the player of the tournament trophy in Indian U-19 team’s Seventh ACC U-19 Asia Cup Trophy winning campaign in Sri Lanka, Chandigarh cricketer 18-year-old Arjun Azad has been included in the Indian U-19 team for the five-match one-day series against Afghanistan to be played at Lucknow from November 22.

The opener, who had amassed 202 runs in the U-19 Asia Cup including a 121-run knock against arch rivals Pakistan in the semi-final, is confident of continuing his fine from against Afghanistan. Earlier this year, Azad was part of India A U-19 team which competed against Afghanistan and South Africa U-19 teams.

“I was part of the India A U-19 team earlier against Afghanistan and South Africa in March but played only two matches. I will aim to take advantage of this call for the Indian U-19 team for the the one day series against Afghanistan U-19 team and score runs consistently. The Afghanistan team has got some quality spinners and I have been practicing against spinners to prepare for this series. Bagging the player of the tournament award in the Asian Champions U-19 Trophy in September also boosted my confidence a lot and I want to cement my place for the Indian U-19 team for next year’s ICC U-19 World Cup,” shared Azad.

Prior to Asia Cup, Azad had scored five half-centuries in nine matches while playing for NCA Jaipur in the NCA Inter-Zone Series. Post the U-19 Asia Cup, Azad represented Chandigarh in the Vijay Hazare Trophy and scored a total of 220 runs in eight matches to become the second highest run-scorer for Chandigarh in the league stage of the plate group.

Azad played a knock of 75 runs against Meghalaya and counts the experience of playing under captain Manan Vohra and coach VRV Singh a valuable one.

“The Asia U-19 Cup made me believe that I can excel at the international level and I wanted to carry the momentum into the Vijay Hazare Trophy. I had decided to play for Chandigarh earlier and playing in the Vijay Hazare Trophy boosted my confidence a lot. Playing a knock of 75 runs against Meghalaya was a special feeling and to share the dressing room with players like Manan Vohra, Bipul Sharma and others was encouraging for me. I was the youngest player in the team and all the players supported me. I grew up seeing Manan bhai play and he also shared tips with me. Coach VRV Singh showed faith in me and I am happy that I played my part in the team’s campaign,” shared Azad.