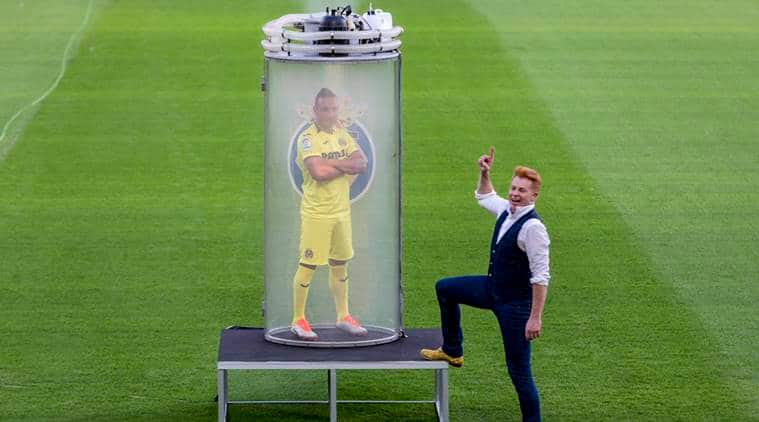 If the fans thought Manchester United’s unveiling of Alexis Sanchez was strange (remember video showing Sanchez playing United’s anthem on piano), Villarreal have clearly upped the ante in that department. The Spanish club unveiled Arsenal icon Santi Cazorla in one of the most bizarre fashions ever seen in football.

As the 33-year old joins his childhood club to get his career back on track after a series of injuries, hundreds of fans packed the stand in the Estadio de la Ceramica to meet the Spanish midfielder. At the stadium, the fans witnessed popular magician Yunke produce the footballer out of thin air.

The illusionist filled a human-sized glass cylinder with smoke and went on to do hand gestures. After a while, as the smoke cleared, out came Santi Cazorla from inside the chamber.

After leaving the fans spellbound with his entrance, the former Arsenal star hung around to meet with the fans and sign autographs. The two-time FA Cup winner spoke to reporters and described it as a ‘special day’. “Today is a very special day for me because I return to what I consider to be my home,” he was quoted as saying by Express.

He further added that he will remain grateful to the club for giving him support in his younger days. “I am eternally grateful to Villarreal for giving me unconditional support during these two years and always open the doors for me,” the 33-year said. “It’s a club that for me is an example and that always does things well despite the difficulties,” Cazorla added.