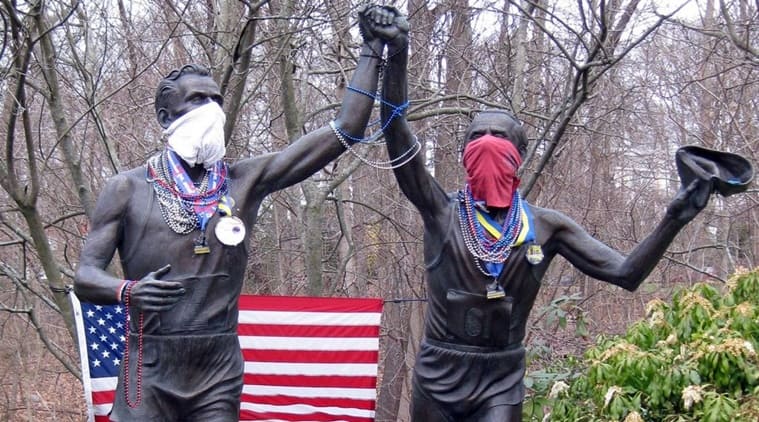 The statue of John A. Kelley, at about the 20th mile of the Boston Marathon course in Newton, Mass. (Ray Charbonneau)

Amby Burfoot, the 1968 Boston Marathon men’s champion, was running along the Mystic River on Saturday morning near his home in Connecticut when his brother, Gary, floated the idea of putting a mask on the statue of John J. Kelley, who won Boston in 1957.

The statue stands in a park across from Mystic Pizza, the restaurant made famous by the eponymous movie starring Julia Roberts. Burfoot and his wife, Cristina, thought putting a mask on Kelley, who was a beloved coach at Fitch High School in Groton, Conn., was a cute way to send the message that runners cared about good health and that everyone else ought to as well. After all, Covid-19 has produced a bit of a running boomlet, since it is one of the few activities that people can still safely pursue while maintining social distance.

They stitched a mask together, slipped it over the statue and snapped a photograph.

That would have been the end, but Burfoot, a former editor at Runner’s World magazine, then thought it might be even better to get masks on the faces of some of the more famous running statues in the country. He put off his “retirement nap” and started working the phones.

Before the day was out, there were masks on “The Starter,” the depiction of George V. Brown near the Boston Marathon start line, and on the John A. Kelley statue at the race’s 20-mile mark. That John Kelley, known as “Old John,” ran Boston 61 times, won the race in 1935 and 1945 and is not related to the 1957 champion.

The Frank Shorter statue in Boulder, Colo., got a mask with a gold hue, which seemed fitting for the 1972 Olympic champion. The former New York City Marathon impresario Fred Lebow got the basic mask treatment in Central Park in Manhattan. The 1984 Olympic marathon winner Joan Benoit Samuelson got buffers for her statue in Cape Elizabeth, Maine, and for the one of her and Bill Rodgers in Davenport, Iowa.

Burfoot made it clear that none of the masks were suitable for use in a hospital setting, lest anyone think a health care worker was deprived of the equipment. 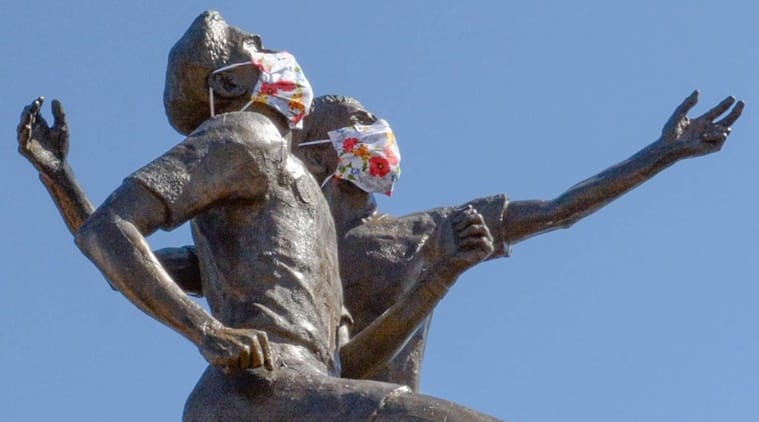 The “Spirit of the Marathon” statue, with Spyridon Louis showing the way for Stylianos Kyriakides, in Hopkinton, Mass. (Bruce MacDonald)

Despite a recommendation last week by the Centers for Disease Control and Prevention that all Americans wear a mask when they leave their homes, plenty of runners are not wearing them. Burfoot does not wear one when he runs alone, but he does when he joins what he called his “geezer” group for walks, which, he said, included appropriate social distancing.

“It takes a little getting used to when you’re breathing that humid air,” he said, “but it seems like the right thing to do.”