Actor Shahid Kapoor wrapped the shoot of his upcoming film 'Jersey', which is a Hindi remake of the 2019 Telugu sports drama of the same name. Shahid and team have been shooting for the movie since last year, but they had to halt the shoot due to nationwide lockdown announced in March. The team resumed shooting for the remaining portions in Dehradun and Chandigarh later this year, and Shahid took to Instagram on Monday announcing the film wrap with a rather emotional note. He even went so far as to call it his "best filmmaking experience yet". "Jersey is a story that speaks of a Phoenix rising from the ashes. The triumph of an indomitable spirit. If there was ever a time I could connect with the underlying spirit of a film this was it. As we all fight through this pandemic. Let's always remember. This shall pass too", he wrote in his note recalling the tough yet unique experience of shooting this film in the post-Covid world.

(Also Read: Shahid Kapoor Cooks This Yummy Fare For Mira Kapoor; Here's What She Had To Say)

On Tuesday, Shahid also shared glimpses from the film wrap. In the Instagram story, we can spot Shahid Kapoor with his co-actor Mrunal Thakur cutting a special cake that looks like a cricket bat and ball. Covered in fondue this hyper-real cake, was placed on a green board that resembled a cricket pitch. "An Awesome Shoot Innings Come To An End...Jersey Wrap!", read the note on the cake. We also spotted another chocolate cake lying next to this themed cake.
"14th December 2019 to 14th December 2020. This is my dream team. Each one of them has my deepest gratitude," Shahid wrote in the image caption. 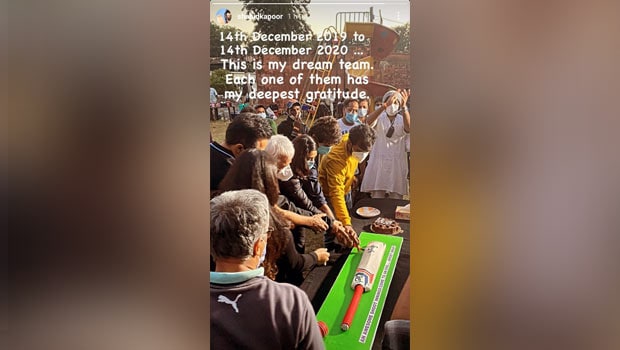