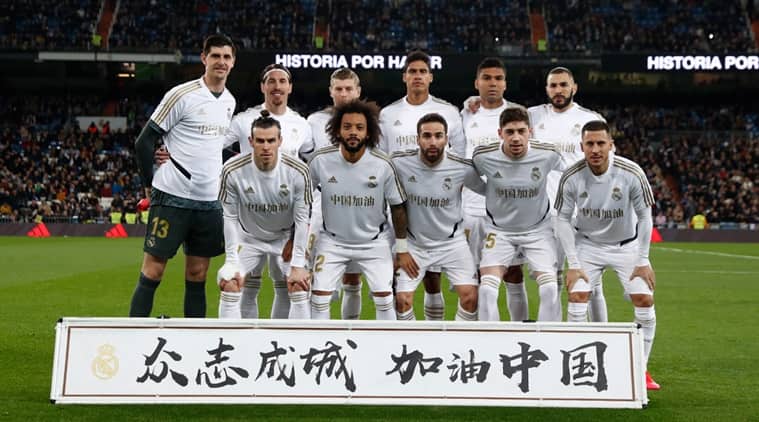 Real Madrid players with a message of support for the people affected by the coronavirus before the match. (Twitter/RealMadriden)

Real Madrid’s La Liga title bid took a dent after Zinedine Zidane’s leaders were held to a 2-2 draw at home to Celta Vigo on Sunday, denied all three points by a late strike from Santi Mina.

Mina latched on to a classy through ball from former Barcelona midfielder Denis Suarez and produced a clinical low finish to equalise in the 85th minute, trimming Real’s lead over Barcelona to one point.

Celta took an early lead through Russian striker Fedor Smolov and Real struggled to respond, leading to the home fans booing their players off the pitch when the halftime whistle was blown.

But the league leaders came out stronger after the break and Toni Kroos levelled in the 52nd minute, shortly after Real captain Sergio Ramos had a goal ruled out for offside.

Ramos then scored from the penalty spot to put Zidane’s side in front in the 65th minute after Eden Hazard, making his first outing in almost three months after recovering from an ankle injury, was tripped by Celta keeper Ruben Blanco.

“Celta are a good team that don’t deserve to be near the bottom of the league but it’s painful to lose the two points after we made such a big effort.”

Real forward Gareth Bale meanwhile avoided a possible red card for a wild tackle on Celta’s Rafinha, escaping with only a booking.

The draw ended a five-game winning streak in the league for the leaders and left them on 53 points after 24 games, one ahead of second-placed Barcelona who beat Getafe 2-1 at home on Saturday.

Celta, who had lost on their last seven league visits to the Santiago Bernabeu, climbed out of the relegation zone into 17th place in the standings.

“I’m happy with my performance, not so happy with the draw but I think we can do better in our next game,” said Hazard.

“When you are winning 2-1 you should win the game. They are good players but they came here just to defend, they had only two chances and scored two goals.”