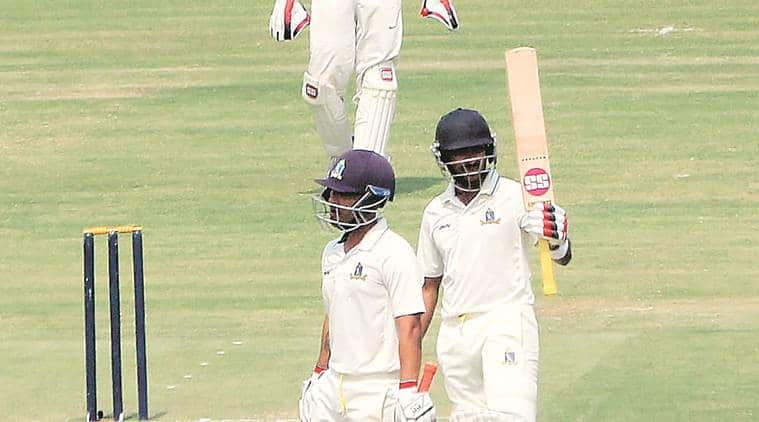 Anustup Majumdar during the first day of the quarterfinal against Odisha.

Anustup Majumdar scored a brilliant unbeaten century to lead Bengal’s fightback. Shahbaz Ahmed once again showed resolve lower down the order to stitch an unbroken 167-run seventh-wicket stand with Majumdar. But the biggest talking point of the first day of the Ranji Trophy quarterfinal at the DRIEMS College ground, Tangi, was how Odisha let it slip, when they should have grabbed the game by the lapels.

The good work that the hosts did in the first hour-and-a-half to reduce Bengal to 46/5, after winning the toss, gradually lost its value because poor cricket replaced the initial surge. The pitch eased out all right, but Odisha also committed silly errors .

Majumdar stood at least three feet outside the batting crease to neutralise the movement in the air and off the deck. The Odisha seamers bowled at military medium but ’keeper Rajesh Dhuper refused to walk up to the stumps to disallow the leeway to the Bengal batsman.

Bengal bounced back to finish the day on 308 for 6, with Majumdar batting on 136 and Ahmed on 82 not out. It was Majumdar’s eighth century at this level and his first since the 132 not out against Gujarat in 2017-18.

Earlier, Abhimanyu Easwaran once again got out cheaply, caught down the leg side off Suryakant Pradhan. His opening partner Koushik Ghosh lobbed a catch to Poddar at first slip against Mohanty. Out-of-form Abhishek Raman played from the crease and missed a straight delivery from Pradhan to be trapped leg-before. Arnab Nandi couldn’t handle the extra bounce from debutant seamer Kanwar Singh Chohan and Manoj Tiwary got a good ball from Debabrata Pradhan — it broke back late off the seam — to be caught plumb in front.

Bengal were staring down the barrel and would have lost Shreevats Goswami before lunch if Dhuper hadn’t dropped a regulation catch behind the stumps. The visitors were on 82 then, with Goswami on 15. He went on to score 34, adding 95 runs for the sixth wicket with Majumdar.

Ahmed came and played fearlessly. Odisha barely had a close-in fielder in front the wicket. And their ’keeper was still standing so far behind that a few edges didn’t carry to the slips. Ahmed is a street-smart cricketer,who revels under pressure. His emergence has given Bengal the required balance.