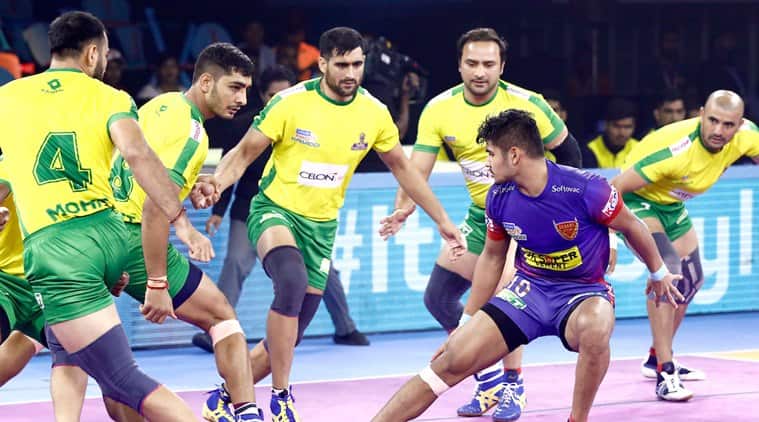 Dabang Delhi KC got back to winning in style with a convincing 50-34 victory over Tamil Thalaivas in their Pro Kabaddi League match, here on Sunday.

Naveen Kumar, 19, was once again the star for Delhi as he added another Super 10 to his name to make it 12 in a row.

Delhi now sit firmly atop the 12-team standings with 59 points from 14 matches.

For the Chennai franchise, this was their sixth defeat on the trot as they slipped to 11th place with 27 points from 14 matches.

Starting from a disappointing loss against Haryana Steelers last night, Delhi re-jigged their raiding department by bringing in experienced pro Meraj Sheykh in place of Chandran Ranjit, resulting in a dominant show from the outset.

Naveen was in exceptional form once again as Delhi effected the first all-out of the match in the 10th minute at the Netaji stadium.

Naveen raced to his Super 10 in the first minute of the second half.

Sheykh produced a three-point raid to reduce the Thalaivas to just one man on the mat.

The third all-out was achieved by the third minute of the half as Sheykh claimed his Super 10 in what was becoming an absolute thrashing for the Thalaivas.

Thalaivas had already committed a whopping 24 unsuccessful tackles by the 15th minute of the half and that summed up their misery.

Rahul Chaudhari clinched his Super 10 and Ajith Kumar secured nine in the final stages of the match but there was no coming back for the Chennai-based franchise.