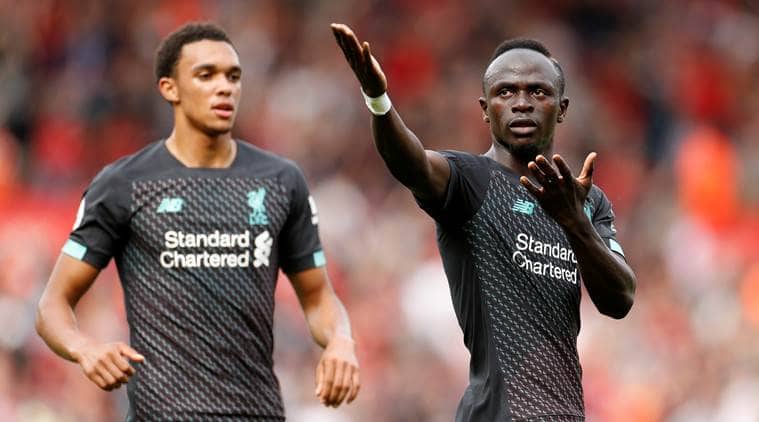 Superb individual goals by forwards Sadio Mane and Roberto Firmino gave Liverpool a 2-1 Premier League win at Southampton and provisionally lifted them to the top of the standings on Saturday.

Liverpool have six points from two games after their opening 4-1 home win over Norwich City. Either champions Manchester City or Tottenham Hotspur, who clash in the 1630 GMT kick off, can leapfrog them.

Looking weary in the opening 30 minutes after their penalty shootout win over Chelsea in the UEFA Super Cup in Istanbul on Wednesday, Liverpool weathered waves of Saints attacks before Mane fired them ahead on the stroke of halftime.

The Senegal forward teed himself up on the edge of the penalty area and curled a rasping shot past home goalkeeper Angus Gunn, who was left clutching thin air.

The European champions dominated after the break and missed several chances before Firmino picked up a loose ball, side-stepped a defender and drove a crisp low shot past Gunn in the 71st minute.

But the visitors barely hung on in the closing stages after a howler by their stand-in goalkeeper Adrian gifted the home side a lifeline, with the Spaniard’s poor clearance rebounding off former Liverpool striker Danny Ings into the back of the net.

Two in two for Aubameyang

Pierre-Emerick Aubameyang grabbed the winner as Arsenal overcame a stubborn Burnley to maintain their winning start in the Premier League with a 2-1 victory at the Emirates Stadium on Saturday.

Alexandre Lacazette put the Gunners ahead in the 13th minute collecting a low corner from Dani Ceballos and showing great strength to turn marker Erik Pieters before driving through the legs of Burnley keeper Nick Pope.

Burnley responded well, however, and drew level two minutes before the break when a low effort from Dwight McNeil fell to Ashley Barnes in the box and the Clarets striker kept his composure to claim his third goal of the season.

Unai Emery brought on club record signing, 72 million pound winger Nicolas Pepe at the break and the home side put Burnley under real pressure. Pope did well to keep out efforts from Aubameyang and the hugely impressive Ceballos and it was that pair who combined for the winner.

Pukki hitting it off in top-flight

Norwich City’s Finland striker Teemu Pukki grabbed a hat-trick, including a thunderous volley, as they beat Newcastle United 3-1 in their first home game back in the Premier League after a three-year absence at a sunny Carrow Road on Saturday.

Everton do the bare minimum

An early goal from Bernard was enough for a nervy Everton to beat Watford 1-0 at Goodison Park on Saturday to secure them their first Premier League win of the season.

No home joy for Aston Villa

Two early goals were enough for Bournemouth to earn a 2-1 win over Aston Villa on Saturday to leave the newly-promoted hosts pointless after two games of the new Premier League season.

Stage set for first operation to give tiger prosthetic limb