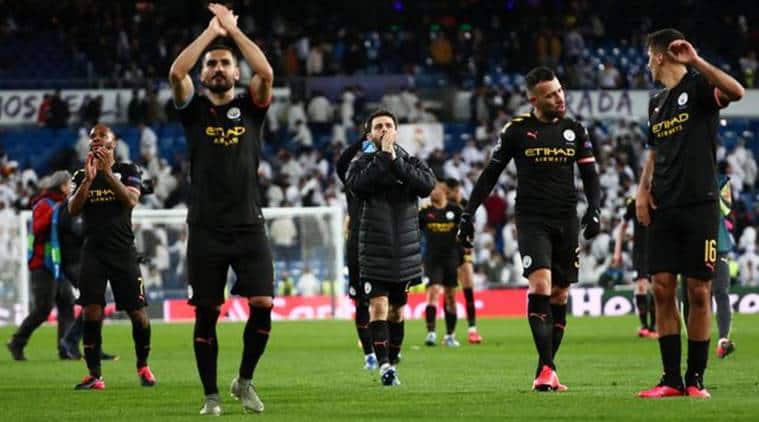 Out of the Premier League title race and, as of now, banned for two years from European competitions, Manchester City needed a shot in the arm. They got that with a memorable result at the Santiago Bernabeu.

How did Pep Guardiola orchestrate the come-from behind win against 13-time European champions Real Madrid?

Questions were asked when star forwards Sergio Aguero and Raheem Sterling started on the bench with the Englishman still tending to a hamstring injury suffered against Tottenham Hotspur three weeks ago. However, it proved to be a tactical masterstroke.

With Gabriel Jesus spending the first half on the wings, Real Madrid found it difficult to pick out a striker to mark as Bernardo Silva took up a more central role. With Ilkay Gundogan and Rodri providing cover for the backline which lost Aymeric Laporte early on, Los Blancos saw their attacks dealt with comfortably, also leaving them exposed to the quick counter-attack. Raheem Sterling is fouled by Dani Carvajal resulting in a penalty being awarded to Manchester City. (REUTERS)

Going behind in the 60th minute after a defensive lapse led to Isco finding the net, changes were needed with Real switching to a more defensive shape. Guardiola decided to bring on Sterling in the 73rd minute, a move that would turn the game on its head.

In the new set-up, Jesus moved back to a central position, and Sterling’s runs put the Real defence under pressure. It was one such run by the England international that opened up space in the middle for Jesus to net the equaliser. Just four minutes later, Sterling’s pace forced a mistake from Dani Carvajal inside the box and the penalty was coolly converted by Kevin De Bruyne. The Belgian had a phenomenal evening at the Bernabéu, creating a handful of chances throughout the match. However, it was when space was opened up by Sterling’s pace that De Bruyne started being more effective, eventually sending in a marvellous cross for Jesus whose header found the back of the net for the equaliser.

And the Belgian put an end to City’s recent penalty woes – they have missed their last four attempts from the spot – slotting one calmly past Thibaut Courtois, capping off a fantastic comeback and a splendid night for Manchester City.