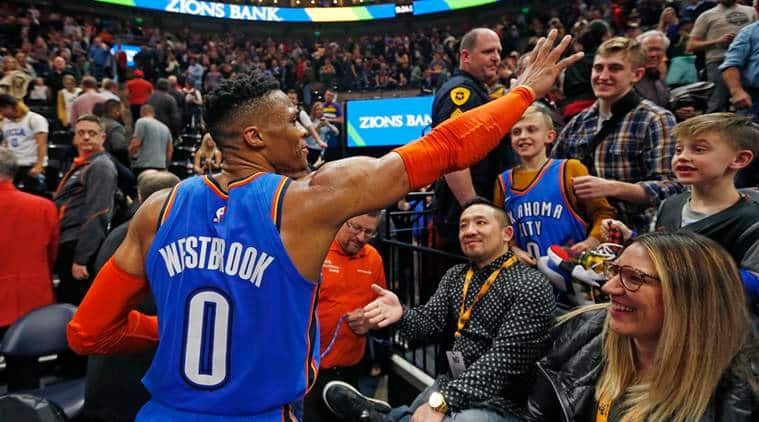 Oklahoma City star Russell Westbrook said he was verbally provoked before directing a profanity-laced tirade at a fan during the Thunder’s 98-89 win over the Utah Jazz on Monday in Salt Lake City.

A reporter from the Deseret News tweeted a video of Westbrook’s comments to the fan.

Russell Westbrook vs. the state of Utah continues to be the most heated rivalry in sports pic.twitter.com/IFV8P0R0bE

After the game, Westbrook gave his explanation: “How it started was, a young man and his wife in the stands told me ‘to get down on my knees like you used to.’ To me, that’s just completely disrespectful, to me, I think it’s racial, and I think it’s inappropriate and insensitive. …

“If I had it to do over again, I would say the exact same thing. I truly will stand up for myself and my family. …

“As for beating up his wife, I’ve never put my hand on a woman. I never will. Never been in any domestic violence before. But once he said the comment, and his wife repeated the same thing as well. That’s kind of how that started.”

Russell Westbrook explains the verbal altercation he had with Jazz fans during tonight’s game, saying fans told him “to get down on my knees like you used to.” (via @espn_macmahon) pic.twitter.com/aObvg6ZuPT

Salt Lake City NBC 5 identified the male fan involved in the exchange as Shane Keisel, a Jazz fan, and spoke with him.

Keisel said he was playfully bantering with Westbrook before Westbrook started cursing at him.

“I never said a single swear word to him, not one,” Keisel told the TV station. “Initially, I was like, ‘Oh, I’m talking with Westbrook, the guy is one of the greats. He’s also classless. …

Five fans at the game were issued “warning cards” citing the NBA’s code of conduct after the incident, the Deseret News reported.

Tonight wasn’t the first time Russell Westbrook has had a heated exchange with fans in Utah.

Here’s what happened in the playoffs last year: pic.twitter.com/GLXMxppj1x

Last year, Westbrook knocked the cell phone out of the hand of a fan in Salt Lake City after a Thunder playoff loss.