Magnus Carlsen scored an impressive 27/36 to pocket $37,500 and a glittering trophy at the Tata Steel Chess India Rapid and Blitz 2019 in Kolkata on Tuesday.

Carlsen’s showing is also a Grand Chess Tour record for the highest number of points scored at a single tour event as he surpassed his own high score of 26.5/36 that he achieved in Abidjan, Cote D’Ivoire.

He also regains the World number one spot in Rapid Chess and is the world number two spot in Blitz Chess.

The Norwegian was not at his best on the final day, but still came up with some exemplary victories to win by a huge four-point margin over Hikaru Nakamura of the United States, who finished second with 23 points in all. The defending champion of the rapid, Nakamura earned $25,000 for his exploits. 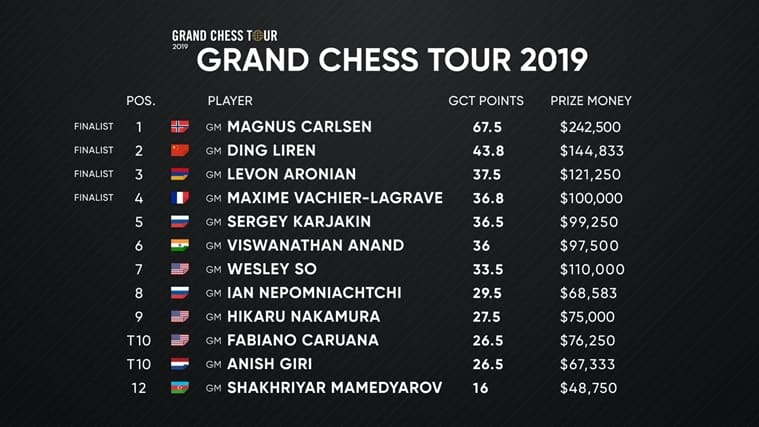 India’s Vishwanathan Anand finished with a disappointing seventh with 16/36 and goes back home richer by $7500. But, more importantly, he misses the qualification berth for the upcoming Grand Chess Tour finals in London starting next week. Anand finished 1.5 points short of qualification.

After starting well in the tournament, Anand lost to compatriot Vidit Gujrathi after a blunder in a level position cost Anand two pieces for a rook and the game soon after. A loss against Giri, a draw with Nakamura followed by another loss against Carlsen sealed Anand’s fate as his campaign ended with heartbreak in the end.

As things stand, Carlsen, Ding Liren, Aronian and Maxime Vachier-Lagrave of France will meet in London to decide the winner of the Grand Chess tour in just under a week’s time.