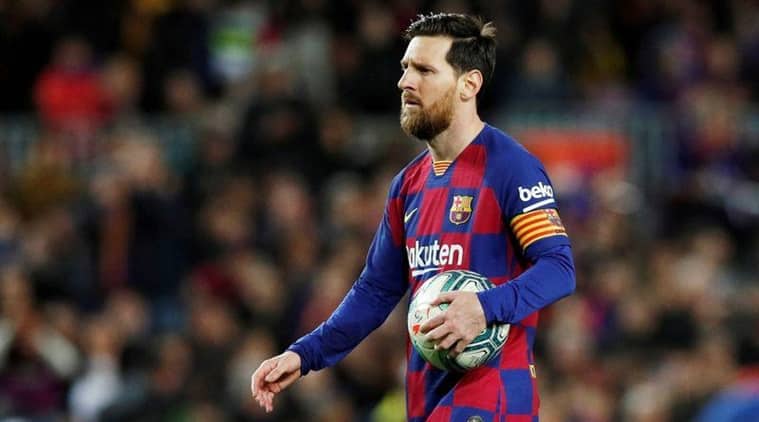 Lionel Messi and his teammates have agreed to take a 70 percent pay cut. (Source: File Photo)

Lionel Messi confirmed on his Instagram on Monday that Barcelona players take pay cuts to aid the ongoing coronavirus outbreak in Spain, like players from clubs like Juventus and Borussia Monchengladbach.

In a message on his social media account, the 32-year-old said that the Barcelona players will take a 70 percent pay cut and make financial conributions to ensure the club’s other employees are paid in full. Messi also took a swipe at the club’s board, led by Josep Maria Bartomeu, who he accused of undermining the players recently.

“For our part, the time has come to announce that, as well as the reduction of 70 per cent of our salary during the state of alarm. We will also make contributions so the club’s employees can collect 100 per cent of their salary while this situation lasts,” wrote the six-time Ballon d’Or winner.

“We want to clarify that our desire has always been to apply a drop in salary because we fully understand that this is an exceptional situation and we are the first ones who have always helped the club when asked.”

“Therefore, it never ceases to amaze us that from within the club there were those who tried to put us under the magnifying glass and tried to add pressure to do something that we always knew we would do,” added the club captain.

Barcelona released their own statement afterwards on Monday too. It stated, “In the case of the football first team the reduction will be more than 70 per cent as agreed with the club. This additional contribution by the team, plus the contribution from the club itself, will guarantee 100 per cent of the salaries of all non-sporting staff, who will be subjected to temporary redundancy this week.”

Both Atletico Madrid and Espanyol have said the club will impose salary reductions on non-playing staff so far. With the league leaders taking the step, other Spanish clubs are expected to follow suit.