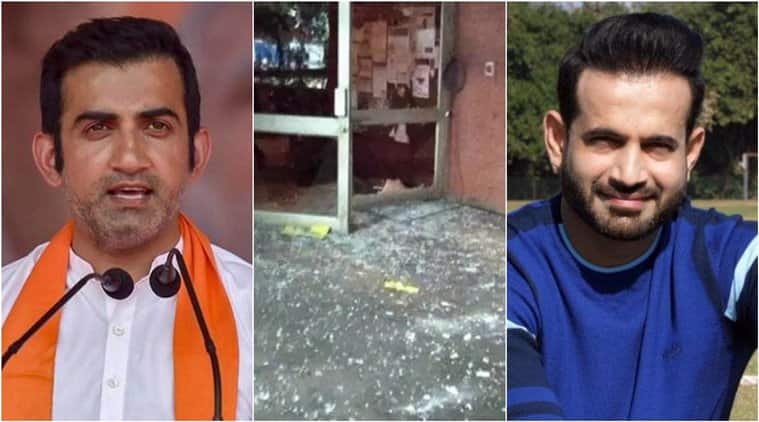 Ranging from former cricketers like Gautam Gambhir and Irfan Pathan to a leading tennis player in Rohan Bopanna, Indian sportspersons have come together to voice their opinion against the attacks by an unidentified mob on students and professors of the Jawaharlal Nehru University on Sunday.

Violence broke out inside the JNU campus on Sunday night as masked men and women armed with sticks and sledgehammers attacked students and teachers and damaged property on the campus. The unchecked violence inside the university sparked off a nationwide agitation and protests have taken place in multiple cities.

“Such violence on university campus is completely against the ethos of this country. No matter what the ideology or bent of mind, students cannot be targeted this way. Strictest punishment has to be meted out to these goons who have dared to enter the University,” the World Cup-winning cricketer-turned BJP MP Gambhir tweeted.

Such violence on university campus is completely against the ethos of this country. No matter what the ideology or bent of mind, students cannot be targeted this way. Strictest punishment has to be meted out to these goons who have dared to enter the University #JNU

Former India all-rounder Irfan Pathan, who announced his retirement recently, said that such incidents do not help the country’s image.

What happened in JNU yesterday is not a regular incident.
Students being attacked by armed mob inside University campus, in hostels, is as broken as it can get. This isn’t helping our country’s image #JNUViolence

Rohan Bopanna, a French Open mixed doubles champion, also condemned the attacks and demanded strict punishment for those behind the violence.

Horrific and shameful what has happened in #JNU , The people responsible for these must be punished. #JNUViolence #JNUattack

We as sportsperson represent INDIA…and now students of our country are being beaten up and the goons have been let off…
I request all the GREATS of the sports of INDIA…speak for our students…they are our future!! #condemnviolence #JNUattack #JNUVioence

Why the guilty ones weren’t caught and charged?? Why were the escorted out of the university? #JNUattack #JNUUnderAttack

Are we all gonna be still quiet?? Watch this happen to our students?? #JNUViolence

Disturbing scenes at JNU campus. Thought are wit the ones who all got injured #JNUAttack

As many as 26 students and teachers were injured on Sunday evening inside the JNU campus. Eyewitnesses said the attacks were carried out by the ABVP — a charge the RSS student outfit denied. The injured were admitted to AIIMS and Safdarjung Hospital so far.

If we win the World Cup, there's no doubt things will change: Harmanpreet Kaur