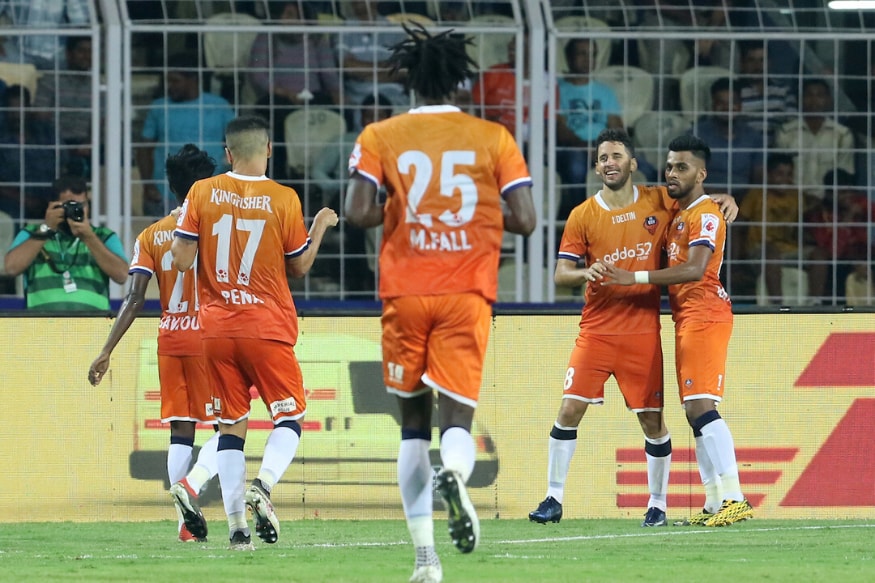 Goa: FC Goa thumped Mumbai City FC 5-2 to go three points clear at the top of the Indian Super League (ISL) 2019-20 table after a feisty encounter at the Jawaharlal Nehru stadium on Wednesday. The victory sees Goa remain on course to clinch the top spot in the league as they fight for it with ATK while Mumbai remain four points ahead of fifth-placed Chennaiyin FC who have played two games less.

Mumbai City did put up a staunch fight even as the scoreline does not say much. Goa were just far more clinical. Rowllin Borges (18') handed Mumbai the lead before Ferran Corominas (20'), Hugo Boumous (38') and Jackichand Singh (39') handed the initiative to Goa. Though Bipin Singh (57') pulled a goal back for Mumbai, Coro (80') struck again to seal the result while Mohammed Rafique ended up scoring an own goal in the 87th minute.

Goa made a sloppy start to the game, giving the ball away cheaply in their defensive half far too many times. Mumbai duly took advantage and took the lead in the 18th minute. A long ball into the box was not cleared by the Goan defenders. Subhasish Bose got to the ball and set up Borges inside the box whose drive took a deflection off Mandar Rao Dessai before settling in the back of the net.

Goa's response was swift and lethal. In the 20th minute, Jackichand stood the ball up from the right-wing. Boumous managed to nod the ball forward which Coro lashed home on the volley from close range.

Mumbai tried to mount a response but were unable to force a proper opening. Goa grew in confidence and punished Mumbai with two quick goals before half-time.

In the 38th minute, a corner from Brandon Fernandes was nodded towards Boumous by Carlos Pena. The Moroccan reacted quickly to direct it into the far corner to hand the Gaurs the lead. In the very next minute, Coro drove forward and slipped Jackichand in on the right who chipped a brilliant finish into the box to stun the away side.

Jorge Costa's charges started the second half with renewed vigour and got a goal back in the 57th minute when Borges kept a clearance alive on the right-wing before cutting it back for Bipin whose first time shot rippled the net.

Mumbai kept pushing and should've scored more. Goa goalkeeper Mohammed Nawaz was forced to make two good saves, off a long ranger from Borges and off a header from Modou Sougou, in quick succession.

Goa, though, hit Mumbai on the counter yet again to put the game to bed. A rapid move saw Boumous slip Coro through on goal and he expertly finished past Amrinder Singh to make it 4-2.

Mumbai were dealt the killer blow in the 87th minute when Coro's attempted shot was blocked away. It fell for Lenny Rodrigues who slammed a cross straight into Rafique and the ball deflected into the goal.