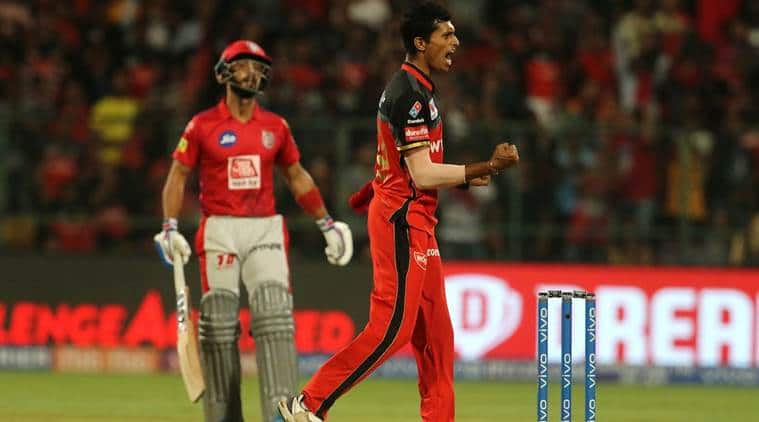 Navdeep Saini’s brilliant penultimate over helped Royal Challengers Bangalore beat Kings XI Punjab by 17 runs on Wednesday. Chasing a target of 203, KXIP were in the hunt until Saini stepped in. Needing 30 off the last two, Saini (2/33), removed duo of David Miller and Pooran but more importantly gave away only three runs. This helped Umesh Yadav defend 27 runs with ease. Saini’s aggressive fast bowling has left fans in awe with many wondering why he isn’t a part of India’s World Cup squad.

#Navdeepsaini The more I see of him, the more I think why he is not there in the World Cup squad..

When victory was in sight and the wickets were tumbling, you get these reactions from the @RCBTweets skipper 🔥#RCBvKXIP pic.twitter.com/WMaEOT523y

Times like these are when we need your support the most! #SaddaPunjab #RCBvKXIP #VIVOIPL pic.twitter.com/KvfyzCTfvF

3 in a row !!
Excellent captaincy from Kohli to rotate his Bowlers according to the situation and gear comeback from Umesh Yadav.
That is the confidence Virat Kohli gives to his Bowlers even though they leak runs. The Best One 🥰🥰😘😘#RCBvKXIP pic.twitter.com/3Zohk8FB2r

Meanwhile, losing skipper R Ashwin remained optimistic about his team’s chances and said, “There can be so many places where I thought we lost the game, but honestly in a T20 game it’s all about winning those pressure moments which we have not been able to win in the last few games. If we had actually held onto those crunch moments, we might have had a couple of more points or probably four points but that’s that we weren’t able to close it out and we got some experience in the middle order couldn’t really close it out in the crucial moments today. It’s all about getting one win together and we can get on a roll like RCB.”