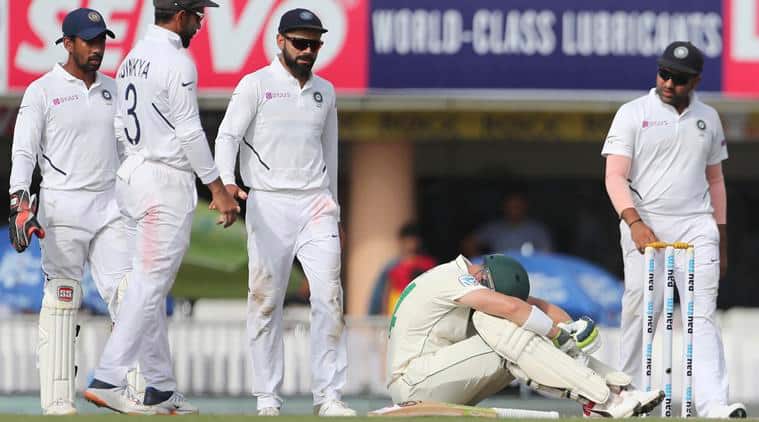 South Africa opener Dean Elgar was on Monday ruled out of the third Test against India as he suffered concussion after being hit by a bouncer from pacer Umesh Yadav.

Minutes before the tea break, Elgar tried to duck a short delivery from Yadav, who was in the middle of a hostile spell of short-pitched bowling. Elgar was hit just above the ear and immediately fell on the ground, calling for medical help.

He was batting on 16 off 29 balls when Umesh bouncer struck him.

“Dean Elgar is still being assessed and we are following the standard ICC concussion protocol. I will send an update as soon as there is one to send. The Match Referee has approved Theunis de Bruyn as Dean Elgar’s replacement as result of concussion,” South Africa media manager issued a statement on behalf of the team.

Elgar is the third concussion substitute after Marnus Labuschagne of Australia (in place of Steve Smith during Ashes Test at Lord’s) and Jermaine Blackwood (vs India replacing Darren Bravo).

The 35-year-old Saha, who was phenomenal behind the stumps in the second Test in Pune, was hurt in the 27th over, while keeping to off-spinner Ravichandran Ashwin.

The latest injury adds to the long list of on-field setbacks that the Bengal stumper had suffered in his career including a career-threatening shoulder injury for which he had to undergo surgery which forced him out of national team for 20 months.

“Wriddhiman Saha had a ball impact on his right ring finger. He is being treated and is doing well. He will be assessed tomorrow morning,” Indian team’s media cell released a statement.

It was George Linde who tried to play a cut but missed and Saha got hit on his right ring finger which prompted physio Nitin Patel to escort him back to the dressing room.

For the remainder of the third day, Pant kept wickets and become the second “substitute wicketkeeper” for India after the ICC rules came into effect in late 2017.

The first substitute keeper for India was Dinesh Karthik, who replaced Parthiv Patel in the final Test against South Africa in Johannesburg in January, 2018.