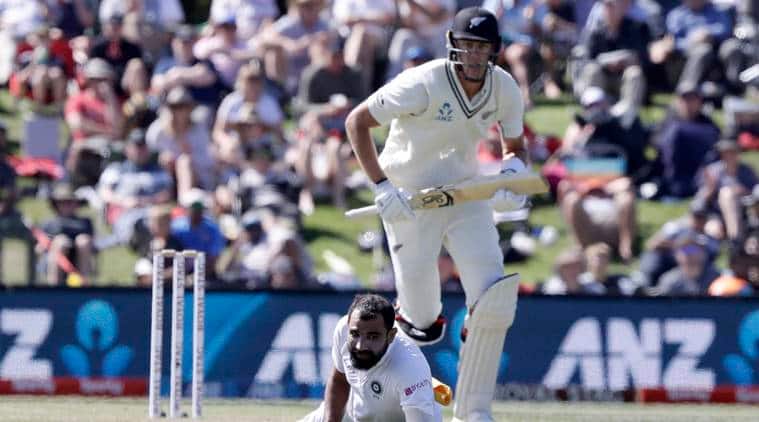 Mohammed Shami falls as he attempts to field the ball hit by Kyle Jamieson on Day 2 of the second Test between New Zealand and India in Christchurch. (AP Photo)

It has been happening for as long as any Indian cricket fan cares to remember. Indian bowlers get the top five or six – almost all the specialist batsmen – relatively cheaply, but find it tough to dislodge the lower order.

To make matters worse, the Indian bowlers, more often than not, fail to show similar resistance with the bat. Often, it is a case of six down and soon all out.

India were 132/5 before Rishabh Pant was run out in the 59th over. Ajinkya Rahane was still out there in the middle. But India were all out within the next 10 overs for 165. Out of the 33 runs added, 21 came from Mohammed Shami throwing his bat.

After a strong start, New Zealand were reduced to 225/7, a lead of 60 at that stage. Taking the last three wickets quickly would have kept the deficit to manageable proportions. But all-rounder Colin de Grandhomme found an ally in debutant Kyle Jamieson, as they added 71 for the eighth wicket, before No. 11 Trent Boult’s 38 took it to 183.

India were 148/4 when Rahane departed, followed by Hanuma Vihari in the next over. In just 12 overs, India were 191 all out with hitting by Pant and a few dropped catches ensuring India avoided an innings defeat.

India seemed to be making a fist of it when Vihari played an injudicious shot to leave the team at 194/5 at tea. After the break, Cheteshwar Pujara got out and in just over seven overs, it was all over. The final score of 242 came after a freewheeling last-wicket stand of 26 between Shami and Jasprit Bumrah.

At 177/8, the hosts trailed by 65. But Jamieson put his hand up again and this time Neil Wagner helped him with a 51-run stand, making the match effectively a second-innings shootout.

India never got going, but starting at 90/6 on Monday, they could have posted a challenging target for New Zealand on a difficult pitch. Vihari and Pant, however, got out in successive overs on the third morning and the writing was on the wall. Ravindra Jadeja, included to add muscle to the batting line-up, was left stranded as the tail again refused to wag.