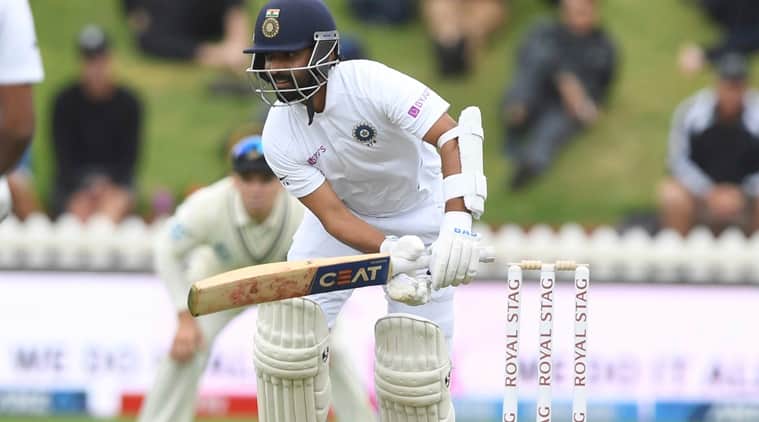 Ajinkya Rahane batted through the first and second sessions even as regular wickets put India under pressure. (Twitter/BlackCaps)

India vs New Zealand (IND vs NZ) 1st Test Live Cricket Score Streaming Online Updates: Ajinkya Rahane (38*) and Rishabh Pant (10*) took India to 122/5 at the Tea break on Day 1 of the 1st Test against New Zealand in Wellington on Friday. India suffered a batting collapse after being put into bat first. Prithvi Shaw and Mayank Agarwal opened the innings. Shaw (16) got off to an attacking start before he was bowled out with an outswinger by Tim Southee, bringing Cheteshwar Pujara out. Pujara (11) and Virat Kohli (2) were both dismissed in quick succession by debutant Kylie Jamieson. They reached Lunch at 79/3, with Rahane and Mayank Agarwal batting. After the resumption, Agarwal was caught at fine leg for 34. Hanuma Vihari was also soon gone for 7.

The Basin Reserve in Wellington, the venue of the match, is known as the windiest cricket venue in the world. The pitch also had more than a tinge of grass covering on eve of the match. India currently stand at top of the points table of the World Test Championship but this series particularly will be a big examination for Virat Kohli’s men.