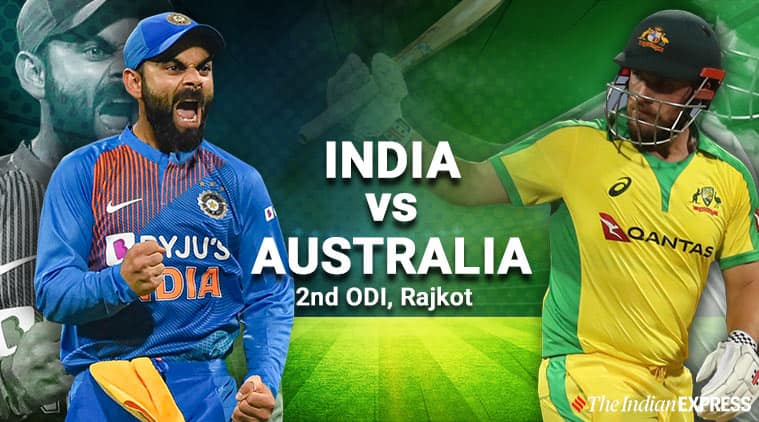 India clash with Australia in Rajkot in the 2nd ODI

India vs Australia (IND vs AUS) 2nd ODI Live Cricket Score Online Updates: Chasing a mammoth target of 341, David Warner’s innings came to an early end as Manish Pandey pulled off an absolute stunner off Mohammed Shami’s bowling. Ravindra Jadeja got the second breakthrough taking the wicket of Australian skipper Aaron Finch. Earlier Finch again won the toss and put India to bat first. Indian openers Rohit Sharma and Shikhar Dhawan got the hosts off to a good start sharing an 81-run stand. Adam Zampa took the first wicket as Rohit missed his half-century. Dhawan reached his second half-century on the trot from 60 deliveries. Kane Richardson got Dhawan’s wicket as the latter missed his century by just four runs.

Zampa also got the wicket of Shreyas Iyer who came to bat at No. 4 and Virat Kohli who scored his 56th ODI half-century. Pandey failed to make the most of the chance as well as he lost his wicket for just 2 runs. KL Rahul capitalised on a flat pitch reaching his half-century in just 38 deliveries. Rahul scored 80 runs from 52 balls before getting run out in the final over.