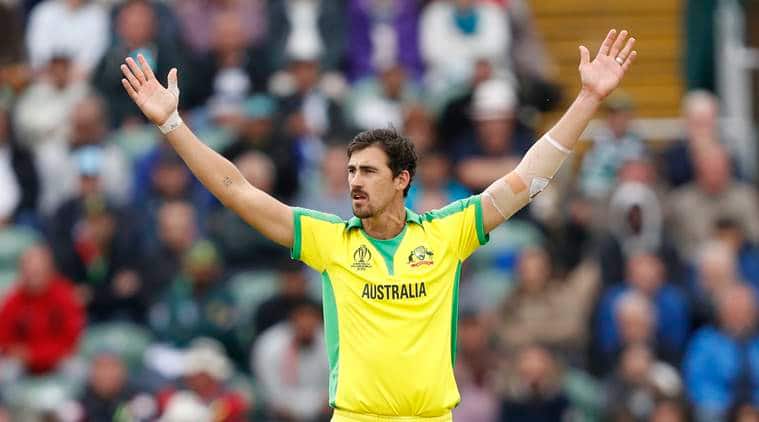 In pole position at top of the table to make the World Cup semi-finals, Australia must be tempted to give their key pacer Mitchell Starc a break this week, but the fast bowler said he has no intention of resting.

Starc, who is now joint number two on the all-time list of Australian World Cup wicket takers alongside Brett Lee, said he would not like to take a break considering that he is currently leading the chart with 13 wickets.

“If I’m fit I’d like to play all the games. It’s not up to me but it’s the World Cup. I definitely won’t be putting my hand up to rest,” Starc was quoted as saying by ICC website.

Australia has won four out of their five matches at the World Cup, losing just one so far.

Strac, who starred with figures of 4/55 during Australia’s 87-run win over Sri Lanka here on Saturday, said, “I’m just glad we won.”

Asked about how he has managed to rise to the occasion throughout the tournament with similar breakthrough spells against West Indies and Pakistan, and now Sri Lanka, Starc said, “I do enjoy the challenge.

The pacer admitted having a higher economy rate than other bowlers but insisted that his aim was to provide breakthroughs for the team.

“It’s the challenge at the death, that challenge of trying to win a game for your team or trying to defend a title, I really enjoy that. It’s something I work really hard at and it’s been a role I’ve done for a long time.

“My economy rate might be higher than others, but I’m there to make breakthroughs for the team,” explained Starc.

“Test cricket is still the pinnacle for me but the fact I’ve kept it pretty simple in terms of my gameplay for white ball cricket has held me in good stead through World Cups,” he added.

The Australian team’s balance has got affected by the recent loss of Marcus Stoinis to injury, but Starc said the all-rounder was doing all he can just by being with the team.

“Stoinis is in great spirits, he’s always got a smile on his face, I think that’s why Justin Langer calls him the spirit of the team. He’s a great team man who just wants to do well for his mates and be around so he’s doing all he can.”

Lockdown Extended Till June 30, Malls, Restaurants Can Reopen From June 8

Motorola Edge + Unboxing And First Impressions ⚡⚡⚡ Better Than Other Flagships?