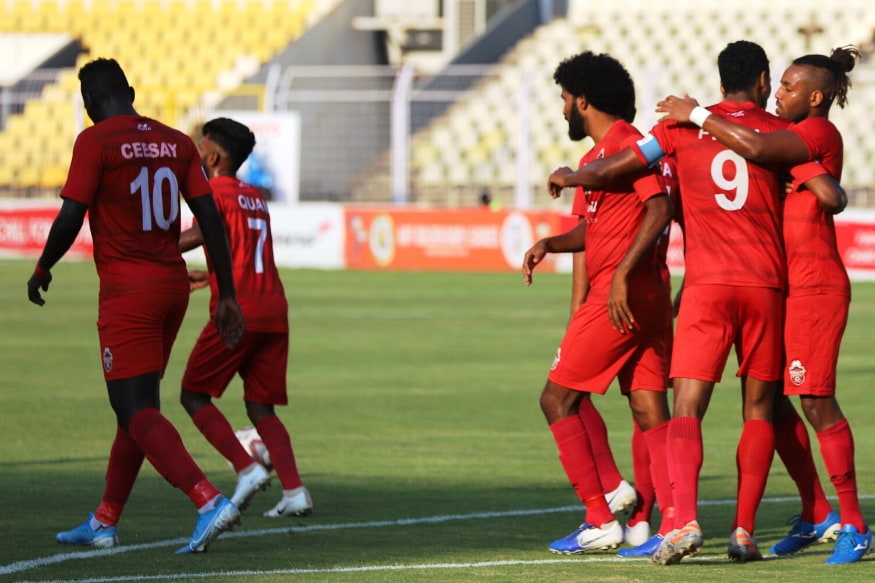 Goa: Churchill Brothers FC Goa registered a 2-1 victory over Real Kashmir FC at the Fatorda Stadium in Margao, Goa on Wednesday, February 19. Willis Deon Plaza opened the scoring by converting a penalty before Mapuia added the second with a stunning strike. Robin Singh pulled one back for the Snow Leopards, but the first half double turned out to be enough for the hosts to walk away with three points.

The victory takes Churchill to third in the I-League 2019-20 standings with 19 points from 11 matches, while Kashmir remain in seventh place with 15 points from 11 games.

Churchill head coach Bernardo Tavares opted for three changes. Sukhadev Shivaji Patil donned the gloves ahead of James Kithan. Quan Gomes was reinstated in midfield, with Lamgoulen Gou Hangshing also getting the nod in the 4-4-2 formation.

Kashmir gaffer David Robertson also reflected three changes to his XI. Brian Mascarenhas was preferred to Novin Gurung at the back. Dalraj Singh also started in defence, while Kallum Higginbotham made way for Danish Farooq upfront.

The hosts enjoyed the better exchanges in the first half, and the score-line reflected so. In the 10th minute, Churchill were awarded a penalty after Farhan Ganie was adjudged to have handled the ball while trying to clear a cross from Quan Gomes. Willis Plaza stepped up and made no mistake from 12-yards, sending Kashmir keeper Phurba Lachenpa the wrong way.

Around 10 minutes later, Mapuia latched on to a loose ball on the edge of the 18-yard box and with a flurry of white shirts closing him down got his strike away and found the top corner in stunning fashion, doubling his side's advantage.

Coach Robertson was forced into making an early substitution in the 24th minute, given how the game was unfolding at this point. He opted to add some fire to his attack, bringing on Higginbotham in place of Dalraj Singh.

The Englishman almost pulled one back before half-time, going for goal on the volley from distance but his effort skimmed across the crossbar in what would have otherwise been a spectacular goal. However, Churchill went into the break with a two-goal cushion.

Churchill resumed the second-half in the ascendency. In the 56th minute, Bazie Armand completely miscued a cross from Jovel Martins, gifting the delivery to Mapuia instead and putting him one-on-one with the keeper, but Lachenpa did well to make himself big and avert the danger.

Mapuia had another golden opportunity in the 80th minute after Plaza had put him through on goal but he couldn't ride on Bazie Armand's challenge and went down. The pieces fell to Plaza with the goal gaping, but his effort was blocked.

The Snow Leopards roared back in the 82nd minute when Sena Ralte's cross found Robin Singh unmarked in the box and the veteran forward made no mistake as Kashmir's two winter signings combined and delivered to stir a nervy ending.

The visitors kept knocking on Churchill's door. With five minutes added on, they had a couple of opportunities in stoppage time. First through Mason Robertson, who was played in by Armand, but Shivaji Patel did well to come off his line and snatch the ball from the Scots' feet. Just a minute later, Armand's shot from distance had plenty of sting but it took a wicked deflection off a Churchill shirt and fizzled past the post.

Churchill braved the late northern storm and registered their second win on the trot, while David Robertson's men will get back to the drawing board after succumbing to back-to-back defeats.